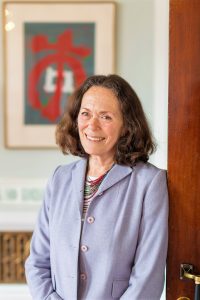 Dawn is Emeritus professor of Anthropology and Forced Migration, University of Oxford and Fellow of the British Academy.

Over the past weeks the British Prime Minister, Boris Johnson, has claimed that a new invasion of stupid, dangerous and criminal migrants was trying to reach British shores in dinghies. This commentary addresses the notions of ‘stupid, dangerous, and criminal acts’ and concludes that yes, the asylum system is broken. Measures need to be taken to open up safe, legal means for all people fleeing armed conflict, death, torture, and other forms of persecution to make their asylum claims in the UK.

Over the past weeks, as calm waters and a lot of hot air filled the sea channel between England and France, the British Prime Minister, Boris Johnson, has claimed that a new invasion of stupid, dangerous and criminal migrants was trying to reach British shores in dinghies. What they were doing in his words was “falling prey to criminal gangs and breaking the law”. His Home Secretary, Priti Patel, made the journey southward to see the invasion by sea for herself. She later claimed that migrants were flocking to Great Britain because they saw France as a racist country where they might be tortured by French police. Were that a correct assessment of the dire situation she went to observe, it would be a scathing rebuke on a country which – like the United Kingdom (UK) – has signed the international treaty (the 1951 Geneva Refugee Convention) to provide asylum to those fleeing war, persecution, torture, and other similar terrors.

What she failed to mention was that Britain was illegally deporting Syrian asylum seekers – many who had family in the UK and were seeking family reunification – to Spain because they had been fingerprinted in that country. This meant that Spain under the Dublin Accords was obliged to process their asylum claims, not the UK. What she and others like the British immigration minister, Chris Philips, failed to acknowledge was that there is no legal requirement for people to claim asylum in the first country that they reach. There are often legitimate reasons, such as being reunited with family members, that asylum seekers try to move on to another country.

Let us get our facts straight. Is there currently an invasion of stupid, dangerous, and criminal migrants in dinghies crossing the Channel from France to the UK? Let us look at the numbers first. So far this year somewhere around 5,000 frightened human beings who have lost the protection of their own state have sought sanctuary and asylum in the UK via small dinghies in the English Channel with the help of people smugglers. These 5,000 represent a small fraction of the nearly 36,000 of those who claimed asylum in the UK last year. And in case anyone is tempted to think that is an unfair burden on the UK, one should keep in mind that far more refugees have sought asylum in France (about 124,000 last year) or Germany (142,500).

Is it stupid to try to cross the Channel by dinghies? Probably not, as all other means of reaching British shores have been shut down progressively over the past 30 years when carrier sanctions first came into effect in the European Union. Forced migrants trying to reach Great Britain have no choice but to travel overland and find way of crossing the Channel. With all legal means shut down and access to lorries greatly reduced, it is no wonder that these desperate people turn to people smugglers to get them across the Channel.

Are these ‘migrants’ dangerous? Hardly so, most are fleeing civil war, armed conflict, and persecution in Syria, Iran, and Afghanistan. The vast majority – nearly 80% – of the Syrians and Iranians who make it to our shore and request sanctuary, are granted asylum as refugees. Are they criminal? Certainly not in international law. Seeking safety in another country from persecution, by whatever means is a basic principle (Article 14) of the Universal Declaration of Human Rights. Despite the fact that the UK has signed the 1951 Geneva Refugee Convention and put its name to the Universal Declaration of Human Rights, it seems to have forgotten its recent history and the international treaties which emerged after the horrors of World War II. With all legal means to get to the UK shut down, it is not surprising that these refugees and asylum seekers turn to ‘criminal gangs’ to help them across the Channel.


British politicians and the media continue to conflate asylum seekers fleeing war and persecution with migrants who ‘voluntarily’ seek to come to the UK, generally for work. This confusion is best made clear by looking at the family history of the British Home Secretary. Ms Patel claims her parents came to the UK as (im)migrants, purposefully distancing her family background from those who might be labelled asylum seekers or refugees. In fact, her parents were fleeing from persecution in Uganda in the 1960s. They were lucky in that they preceded the nearly 50,000 Indians who were expelled from Uganda by Idi Amin in 1972. These ‘East African Asians’ had lost the protection of the state that they had settled in as economic migrants from India a generation or two before. In their search for safety and sanctuary, neither Priti Patel’s parents nor these tens of thousands of other Indians had to travel overland and then cross the English Channel by dinghy in order to ask for asylum in the UK. There were no carrier sanctions in those days, so her family and the other Indians boarded airplanes and arrived in the UK as forced migrants fleeing from Idi Amin’s Uganda.

Ms Patel has said herself that the asylum system is broken and that she plans to change the law to deter people from seeking asylum in the UK via small craft in the English Channel. That would indeed be a worthwhile endeavour as long as she opened up safe, legal means for all people fleeing armed conflict, death, torture, and other forms of persecution to make their asylum claims in the UK. This might mean negotiating an agreement with France to undertake refugee status determination in a border zone such as Calais for unaccompanied children, and adults. It might also mean rethinking or lifting carrier sanctions to allow people fleeing persecution to board flights to the UK where they can then make their asylum claims. Or better yet, opening means for making asylum applications at our embassies and consulates worldwide. Such changes in current laws would reduce the demand for irregular and dangerous crossing of the English Channel and would certainly make it harder for people smugglers and criminal gangs to find business for their operations in Northern France.