Tracing unhealed scars: a look inside the misery of today’s Iraq 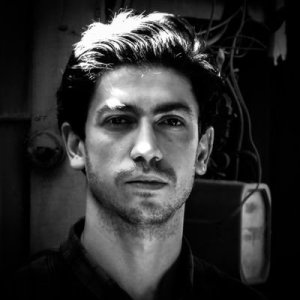 Nabil is an independent journalist and photographer from Baghdad.

Since October 2019, flocks of Iraqis have been taking to the streets in frequent mass demonstrations against the sometimes-lethal failure of post-invasion political elites. But their demands transcend decrying a chronic lack in the provision of public services. The ruling class and their entourage are getting richer, while the rest are embattled by poverty and terror, a gap that is apparent on the streets of Baghdad. In this context, some of those who advocated for the destruction of Iraq are given a platform by international media, giving a false image of Iraq, while independent local journalists are cancelled, not given similar opportunity to convey what’s taking place on the ground to the rest of the world.

When I was a child, my father used to tell my brother and me bedtime stories on the rooftop where we slept hot summer nights. When darkness cloaked the horizon, twinkling stars adorned the sky, palm fronds swayed in the wind. Sometimes he would guide my index finger to trace the star constellations above, and I enjoyed these nights. But it is also there, on that rooftop, where I first encountered war. In 1998, the peace birds sent by the United States and Britain arrived again to revel in the skies of Baghdad. Our house wasn’t near a military camp or a government building, and we watched as Westerners dropped bombs on us, inferior humans, in a rampant killing orgy.


On a recent evening, I drove to al-Mansour, once an elegant neighborhood in western Baghdad. I left the car at a friend’s place, crossed 14 Ramadhan street – where one of the hundreds who last year attempted suicide shot himself on a sunny morning – and ambled the side streets alone in the dark. When sunlight fades out, the city’s nouveau riche emerge, roaming main streets in their brand new automobiles. They roll up their car windows in the faces of the hungry children who beg for alms at checkpoints and crossroads. One of those drivers floored the throttle past me in his white Land Cruiser, trailing clouds of dust. I muttered a stream of vicious slurs, beat the dust off my white linen shirt, and walked on.


A few meters ahead, a diesel generator that occupied a sidewalk was rumbling aloud. The streets did not smell like Narenj trees or freshly watered gardens. Instead, a foul amalgam of motor-oil, damp garbage and dust crept into my nostrils. Some houses were demolished, or sliced into pieces, making way for smaller dwellings. Others were occupied by companies or diplomatic missions. They had security guards at the gates and gigantic concrete barriers all around. Other houses were abandoned, with chains around their front doors. There was a sign draped over one fence: “It’s not for rent or sale”.
Many people had fled for their lives after the Anglo-American invasion of 2003 had birthed a sectarian war between extremist groups which terrorized, killed and displaced local communities. Someone from The Washington Post recently wrote, “There was a nightmarish war underway between Sunni and Shiite Muslims”. But I don’t recall wielding a sword and running amok in neighboring quarters. In fact, my family was victim to rival armed groups blatantly omitted by the Post. My father, for example, was held at gunpoint by an armed group warring against another whose militants tossed my late uncle in the trunk of their car.


Today, some of those warlords have a say in the farce that is the “democratic political process”. Tourists rake in money and become social-media stars writing in a divisive-tone about the “clashes” between the young unarmed protesters and security forces. Perhaps I shouldn’t have expected better. A journalist with The New York Times once arrived with gunny sacks and bagged up whatever documents she stumbled across in areas liberated from Islamic State (IS) militants. Even Kanan Makiya, who danced to the cluster bomblets landing in my family’s garden, is given a platform to narrate his “activism”. He too now writes about the young “Shi‘a demonstrators”, whose parents’ annihilation he once cheered for.


Making my way along the side streets, I soon arrived at an intersection bustling with unmasked customers filing into crammed restaurants for dinner. Some of them sat outside at the tables lining the pavement as families shopped for over-priced clothing at adjacent stores. Beggars, drooling, hovered nearby. No one seemed to notice them.

In al-Mansour, the widening rift between the city’s rich and poorest is harshly evident. Their tasteless SUVs would certainly not fit through the crumbling alleyways of al-Hayder Khana, I thought to myself. It’s also not surprising that few adhere to the safety measures that would limit the threat of COVID-19, which has so far taken the lives of over 10,000 Iraqis. In a recent tweet (see below), the prime minister himself didn’t seem worried that 14 million pilgrims convened in Karbala to mark the annual Arbaeen commemoration. But does Iraq’s crumbling health system have the capacity to treat more COVID-19 patients if a second wave hits?

In recent months, a doctor has described to me the “misery” in state hospitals. Privately he’s told me that “many people are getting re-infected, especially doctors”. A stream of perished or infected medical workers’ portraits dominates the Facebook feed of the Iraqi Medical Association. He and other doctors, all survivors of COVID-19 infection, have told me of an insufficient distribution of protective gear in past months. “We buy them with our own money,” one of them has said on condition of anonymity. Even non-medical workers sometimes cook meals and walk hospital corridors without wearing masks and gloves.

During my frequent strolls in the city’s impoverished alleys, I have witnessed firsthand how governance failure puts the lives of destitute Iraqis in harm’s way.

Earlier this year, when authorities ordered restaurants to close their doors, life seemed normal in the downtown area. There, busy restaurants and teashops carried on serving their regulars, but few, if any, could afford to wear masks. There was no sign of health awareness teams handing out protective masks at crammed markets. The impoverished men and child workers, who found no alternate but to eke out a living in precarious conditions, risked their lives doing so – otherwise, they would have starved to death.

On a recent trip south to the family’s cemetery in Najaf, our bus cruised over a road that penetrated a landscape of dry palms and plastic litter. Faded electoral posters, falsely promising a better future, were peeling off in the sun. Children sold bottled drinking water at every bump, pothole and checkpoint. Along the 160 miserable kilometers from the capital, one unmasked policeman fined unmasked drivers, even though there were no signs advising travelers to observe protective measures.

It is this relentless blend of incompetence, failure and indifference to the wellbeing and future of the population that pushed young Iraqis to protest in October 2019.

Poverty, unemployment and corruption were all rife last year – as every year since 2003, when the US and Britain destroyed Iraq and handed it out to sectarian crooks. There are enough grievances to make Iraqis hold banners and chant slogans on their daily commute to work – if they have jobs in the first place.

“And every year when earth turned green the hunger struck us
Not a year has passed without hunger in Iraq.” (1)

But the state and its media parrots seem so distant from ordinary citizens and their everyday hardships: so distant that Iraq’s toppled premier Adel Abdul Mahdi urged in November 2019 that life should return to “normal”.

To him and his ilk, it was normal that the city of Mosul remained an apocalyptic site of devastation and that over a million people lingered in displacement camps. It was normal that child workers, in their plentiful thousands, were stripped of their childhood in the forgotten corners of Baghdad where they work in exploitative conditions. It was normal that in Iraq’s port-city of Basra, which floats on a sea of oil, people lived among piles of trash, embattled by cancers, poverty and pollution.

One year on, and the will to act in people’s favor – passing an electoral law that meets protesters’ demands, for example, and to punish the murderers of young protesters – seems missing. It forces Iraq’s youth to frequently protest, disregarding the threat of COVID-19. It was the pandemic that forced the protests into a pause earlier this year, not the “unknown” snipers or the loose militiamen who abducted and killed with impunity.

On Sunday October 25th, Iraqis marched anew to mark the day the uprising resumed last year after days of brutal crackdown. They did so in honor of their comrades, whose hungry bodies and joyous faces were deformed by the lethal weaponry of armed men yet to be held accountable.

In today’s Iraq, salaries are always overdue. Figures from both UNICEF and the World Bank indicate a significant increase in poverty. A document shared with me by Dr. Ali al-Bayati, a member of Iraq’s High Commission for Human Rights, indicated 335 suicide cases in Iraq this year – a number likely to have increased as you read these lines. Militiamen, enabled by lethal security failure and loose accountability, clumsily fire rockets on residential areas, terrorizing and killing innocent civilians.

Piling on the agony, the state challenges the desperate youth instead of presenting answers to their ordeals. A recent statement from the Ministry of Interior said 657 beggars were arrested in Baghdad in a campaign to eliminate a “bad phenomenon”. This utopian jargon of state rhetoric, implying that no reason forces its citizens to beg, lays bare how detached the state is from the masses. Such practices contributed to igniting public rage last year, and so they will again in the near future.

4 thoughts on “Tracing unhealed scars: a look inside the misery of today’s Iraq”