Graphene with a twist 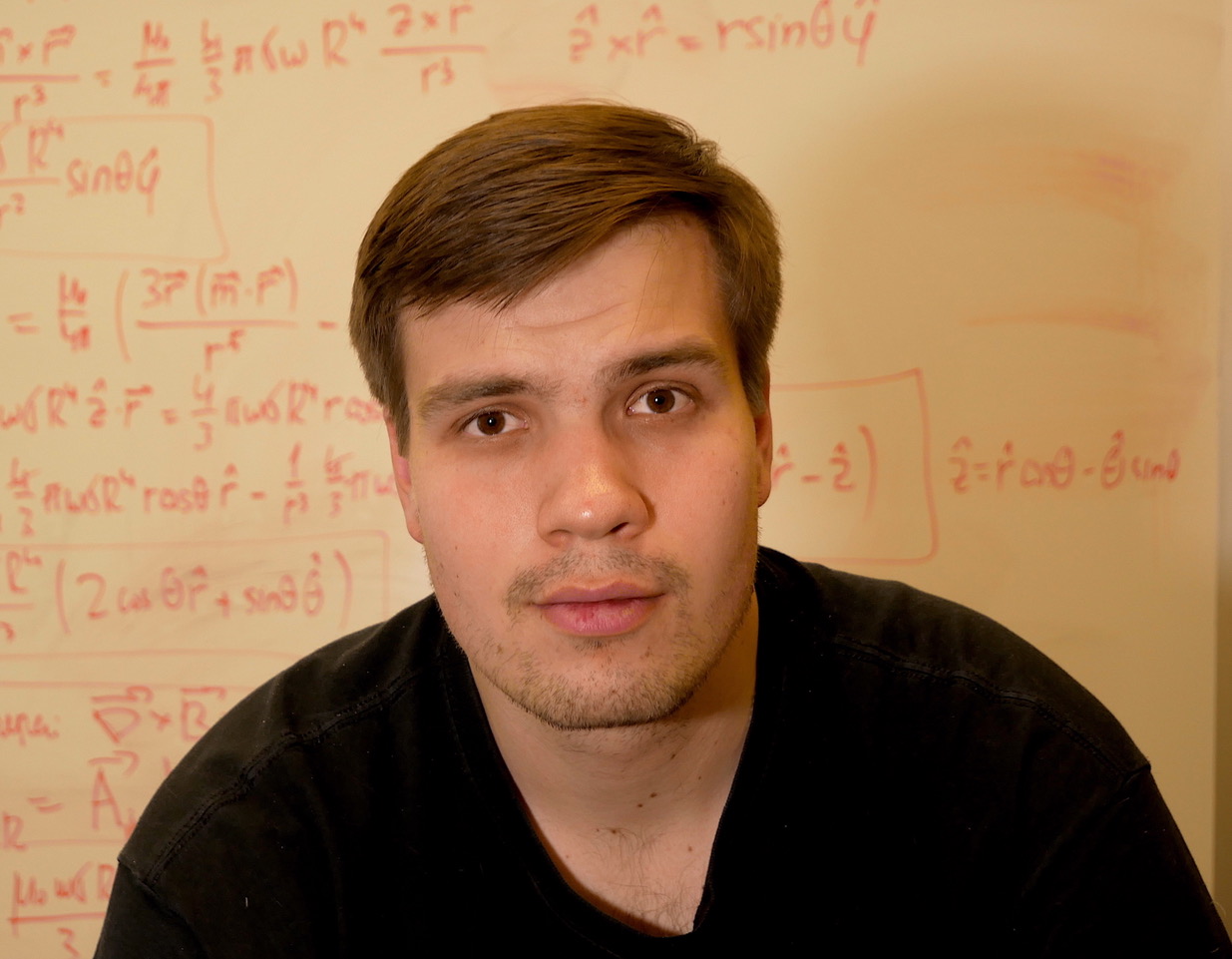 Petr is a Marie Skłodowska-Curie Postdoctoral Fellow at the Institute of Photonic Sciences in Barcelona, Spain. He received his PhD in experimental condensed matter physics at the Ohio State University in 2018 with the focus on two-dimensional materials. His research interest is now focused on experimental studies of the exotic phenomena in strongly correlated systems.

Recent developments in condensed matter physics have brought scientists to a fascinating discovery of unexpected superconductivity in magic angle twisted bilayer graphene. Arguably, we are on the verge of many serendipitous findings that could possibly bring us to a future depicted in sci-fi sagas with cheap energy, fast transportation and scalable quantum computations, all realized at room temperature. However, physicists still need to address some important milestones to allow magic angle twisted bilayer graphene to deliver these futuristic achievements.

Everything big has to start small and, in the case of fundamental research, in a small room fully packed with physicists. The American Physical Society’s March Meeting is a condensed matter physics conference happening each year in different cities across the United States. In 2018, this particular March Meeting in Los Angeles was far from being ordinary. The rumors about a newly found material and its mysterious connection to room temperature superconductivity, the holy grail of condensed matter physics, were spreading amongst the participants.


Physics Professor Pablo Jarillo-Herrero of Massachusetts Institute of Technology (MIT) was about to give his talk in front of an overcrowded room. The interest was immense and the meeting organizers had to install a set of big screens in the Center’s main lobby to broadcast the talk for those not able to fit inside the presentation room. The meeting participants gathered around the screens and started watching Prof. Jarillo-Herrero’s presentation. During the talk we understood very quickly that this new material, which had been named magic angle twisted bilayer graphene (MATBG), is mimicking exceptionally closely the famous properties of high-temperature superconductors (HTS), materials widely recognized as promising entities for room-temperature superconductivity.

Why is superconductivity at room temperature and ambient pressures so important? Superconductivity implies a dissipationless transport of electrons from point A to point B in a superconducting electrical circuit below the specific “critical” temperature (typical HTS’ critical temperatures are approximately -140 °C, still well below room temperature). Superconductivity’s quantum mechanical origin is fundamentally different from the classical mechanism of diffusive transport of electrons that our society so heavily relies on nowadays. In a superconductor, electrons pair up, a reconfiguration known as Cooper pairs, allowing them to “condense” into the same quantum ground state leading to the vanishing wire resistance. In the case of conventional metal conductors, electrons always experience some finite resistivity, losing their energy via wire heating. Presently, transmission and distribution losses in modern power grid conductors are estimated ~5-7% (1). This huge amount of lost energy has a significant impact on the environment. Substituting power grid lines with lossless superconducting wires operating at ambient conditions will be a giant step towards a purely “green” energy that humankind so desperately needs right now. Moreover, we can use room temperature superconductors as elements of quantum logic – superconducting “qubits”, immediately improving security and speed of calculations of future computers, going beyond the famous Moore’s law. Room temperature superconductors will be used for remaking the transportation system by levitating trains and producing extraordinary accelerations, requiring minimum energy as large magnetic fields will be achieved at almost no cost. Overall, realization of a room temperature superconductor and scaling up its mass production will bring us to another technological revolution.

Even though MATBG was described theoretically seven years before Prof. Jarillo-Herrero’s experiment (2), no one expected to observe superconductivity in this new material (3-7). This new superconductor is currently the very first one that was created artificially and from only one type of atom. Indeed, we know all about classical superconductors such as bulk aluminum discovered more than a century ago (8), or more peculiar types of HTS such as cuprates discovered more than thirty years ago (9). But all of them can either be found in nature and/or synthesized by complicated methods, e.g. in a molecular beam epitaxy chamber, relying on a proper arrangement of a multitude of different atoms. In contrast to that, MATBG consists only of carbon atoms. Furthermore, MATBG appears to be extremely rich, hosting many other exotic quantum phases such as orbital magnetism, topology and correlated insulators. All of these properties may have immediate scalable applications, e. g. in reconfigurable and compact microwave circulators useful in information processing. MATBG has become an ideal playground for curious scientists.

What is magic angle graphene?

The most interesting materials are usually those in which motion of the electrons depends on other surrounding electrons. These systems are typically called “strongly correlated” and can lead, for example, to forms of unconventional (high-temperature) superconductivity or magnetism. The ability to stack graphene and other graphene-like materials one on top of another became a versatile tool to engineer new physical and electronic properties artificially. Following this idea, the MIT researchers took two graphene sheets and rotationally faulted them upon each other by a “magic” angle 1.1°. It has been known that under this small rotation the twist modulates the tunneling of electrons between two layers in a spatially periodic (Moiré) way to create a pair of very flat isolated low-energy bands (allowed electronic energies), which effectively dump the kinetic energy of the moving electrons, enhancing the role of electron-electron interactions. This leads to the appearance of superconductivity and other “strongly correlated” phenomena in MATBG. Very clean and highly tunable MATBG may therefore serve as a proxy for more puzzling types of HTS.


Interestingly, MATBG has both superconducting and insulating properties. This is paradoxical, because insulators are the quantum phases in MATBG that prohibit electron transport, and are thus opposite in behavior to superconductors. It is widely recognized in cuprates, formed by complex atomic arrangements, that superconductors and insulators are “friends”, in which pairing between electrons occurs in a heavily-correlated environment that can locally form insulating states. In contrast, in simple metals made up for example of single atoms, superconductivity occurs via pairing weakly interacting band electrons. In such systems, any attempt to arrange the electrons in an insulator would be suppressing superconductivity. What is the connection between superconductivity and insulating states in MATBG? If scientists find that the two phases “live and die together”, this will be similar to what is found in HTS forms such as cuprates. If, on the other hand, the two phases have different microscopic origins, then it will point towards a different, more conventional type of superconductivity, which competes with insulating states. Although recent attempts to tune electronic interactions in MATBG supported the latter scenario (7), superconductivity in MATBG is still unusually enhanced by electron-electron interactions. Ultimately, a precise understanding of the electron pairing mechanisms in superconducting MATBG will be important to compare it to other HTS and, thus, to evaluate its true potential as a room-temperature superconductor.

It has only been two and a half years since Prof. Jarillo-Herrero’s presentation in Los Angeles, but his group’s original work (3,4) already has thousands of citations. A new broad subfield of condensed matter physics was opened. Even though reproducing the experiment is tough because of technical aspects, including working with a low disorder system at very low temperature (just a few degrees above the absolute zero) and requiring high data quality, preliminary data have shown us how rich this new platform is. The whole zoo of exotic quantum states coexist all together, upon a mere charge carrier density tuning, which has not been seen in any other solid state system before.

The application of magic angle graphene is broad for both industry and fundamental science. For example, correlated insulating states discussed in the previous section can host magnetism. In the case of MATBG, it is purely orbital, making it new and promising as an embedded magnetic memory in logic devices. Another possibility would be to build single photon detectors based on MATBG, which would become a key technology in quantum sensing, quantum key distribution, information processing and radio astronomy. Its low electronic heat capacity due to its extremely low charge carrier density in the superconducting state can allow it to work even in the terahertz range of frequencies, which will find important applications in the field of molecular physics and biophysics, materials sciences and technology. Terahertz single photon detectors encompass rotational and vibrational spectra of molecules, superconducting energy gaps in metals and electron energy spectra in semiconductor nanostructures.

It is exceptional that scientists were able to turn graphene, a material that is typically poor on strong electron interaction phenomena, into a powerful tool providing an unprecedented tunability between so many peculiar electronic states at once. Since MATBG is in many ways a simpler system than long-studied HTS, the hopes are high that the experiments will soon shed light on the mysterious physics of strongly correlated materials. Following this discovery, society will have a whole new array of improved technologies. Environmental issues such as climate change make us think about material usefulness. In addition to all the other advances mentioned above, a room temperature superconductor will also contribute to less energy waste and higher performance. We are now just beginning the magic…