String theory and our conceptions of reality 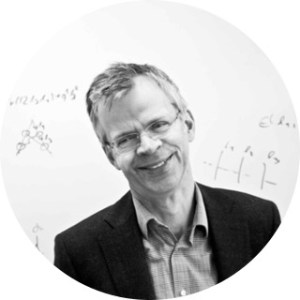 Bill is Professor of Theoretical Physics at Queen Mary University of London, and the founding director of the Centre for Research in String Theory. His recent book “Everything is Now: Revolutionary Ideas from String theory” aims to introduce the general reader to recent research in fundamental theoretical physics. www.billspence.org

The unification of quantum theory and Einstein’s theory of gravity has stood for a century as the great unsolved challenge of fundamental physics. Standard methods fail completely and radical new ideas are clearly needed. Work on string theory over the past two decades has revealed extraordinary new approaches to describing space and time and the fundamental interactions of matter; these promise much, but the real test is yet to come – experimental verification.

The first thirty years of the last century utterly overturned the existing, everyday understanding of the physical world. Before 1900, it was thought that every event occurred at a definite place and at a definite time. People believed that space and time were the immutable planks of a stage upon which everything happened according to fixed and predictable laws, and entirely independent of whoever might be observing those events.

Then, first, special relativity destroyed the notion of observer independence, discovering that objects shrink and time slows down, depending on the relative motion of an observer. Thus, space and time became linked. A decade later, general relativity went further, discovering a dynamic space-time continuum, and extraordinarily, showing that this was what gravity actually is (1). A third, and final shock came in the 1920s, when quantum mechanics showed that the premise that objects could be described as being in definite places at definite times was wrong (2).

These momentous changes not only sent shockwaves throughout all of science, but also impacted popular culture, intriguing people and influencing currents of thought across politics, literature and art. Ideas about “relativity” and “uncertainty” diffused into many areas. All that seemed solid in the natural world seemed to be melting into air (3), at the same time as political movements calling for a radical transformation of society grew in strength following the first world war.

Society has changed dramatically over the past century, although the underlying free market-based economic system has remained. There are some parallels with the development of theoretical physics. Since the 1920s, there have been two major advances – physicists combined special relativity with quantum mechanics to create quantum field theory, and fundamental particles were shown to carry different sorts of charges. The resulting so-called Standard Model (see video below) has been highly successful in describing all the non-gravitational forces. But the fundamentals of physics did not change drastically, and Einstein’s general relativity remained untouched.

The problem of the century remained unsolved – how could gravity and quantum theory be reconciled? All of the obvious methods to achieve this were tried, and all failed. It was clear even at a naïve level that the resolution must involve some sort of quantum spacetime, where space and time themselves become indeterminate and uncertain. But what sort of conceptual framework could possibly describe this sort of strange phenomenon?

In another parallel with the political sphere, in the 1960s and 70s small groups of mathematicians and physicists began exploring two radical alternatives to the standard picture of space-time. The first was a theory in which space and time are replaced by vibrating strings, leading to the superstring theory of Michael Green (Queen Mary London) and John Schwarz (CalTech) (4). The second, inspired by Roger Penrose in Oxford (5), was the development of twistor theory, replacing the points (events) of space-time with light rays.

String theory proved to be a portal into a fantastical world of extraordinary phenomena (6). Einstein’s equations were quickly proved to be a consequence of this theory. The strings in the theory were then shown to be replaced by sets of fluctuating surfaces, or membranes. It was found that these could “feel” space and time, determining the number of dimensions, and whether space was rolled up into compact shapes or wrapped around holes in space. The membranes formed beautiful geometric patterns, rather like higher-dimensional complex soap films. It was also discovered that gravity was holographic – the gravitational force projecting itself onto a screen or boundary surface and appearing like the other forces we know, such as electricity and magnetism. String theory also found a new way to understand black holes in terms of membrane quantum states, providing a way to understand the evaporation of black holes.


While much of this was emerging from string theory, twistor theory remained relatively dormant. It seemed a somewhat arcane mathematical construct, without much application to physics. But in late 2004 it suddenly opened a new window into another world. Unexpectedly, it was found that the language of twistor theory radically simplified our understanding of how fundamental particles interact. The “scattering amplitudes” that describe those interactions were shown to have a new and simple formulation in terms of twistors. The language of particles was being replaced by the language of light rays. This new paradigm rapidly led to new and more powerful approaches to explain fundamental high energy physics. Formulae covering tens of pages were shown to be equivalent to expressions written in one line. This led to the discovery of a new and strange geometry underlying this magic. It began by revealing a remarkable crystal structure, called the amplituhedron, whose facets encoded particle interactions as pure geometry. It was subsequently realised that this was part of a larger new world of “positive geometries”, defined by simple arithmetical relations.

The first decades of this century have thus matched those of the last century in terms of overturning the established understanding of fundamental physics. But with one essential and critical difference. Quantum mechanics and the theories of special and general relativity were quickly verified experimentally. They explained existing mysteries, such as atomic structure and anomalies in the motion of planets, and they made predictions that were tested and verified.  Some of these tests captured the public imagination. One was Eddington’s trip to the island of Principe in 1919 to observe a solar eclipse, proving Einstein’s prediction that light rays passing the sun would bend due to its gravity. Another was the “double slit” experiment, showing that electrons appeared to be able to be in two places at once, according to the predictions of quantum mechanics.

In contrast, the rapid development and application of the formalisms and plethora of radical ideas of twistor and string theory over the past few decades have not led to straightforward experimental tests. It is clear that we need entirely new ways to think about space and time in order to unify gravity and quantum theory. This is also essential in order to understand the birth and evolution of the universe and recently observed phenomena such as black hole mergers. The theory is flourishing, with profound new concepts being discovered and explored. There are compelling reasons to believe that we are on the right track, including the power of the new techniques and their simplicity in comparison to previous methods.

But while we may believe that “Beauty is truth, truth beauty” (7), whatever is written on the Grecian urn of Nature has to be read by experimental methods in the end. The new and growing observational science of gravitational wave astronomy is providing fascinating new insights into how quantum effects modify gravity, partly using methods inspired by string theory. Moreover, technical improvements to the LHC particle accelerator at CERN in Switzerland are enabling a deeper probing for new phenomena. We may yet find experimental guidance on which of the radical ideas arising from string theory are realised in nature.