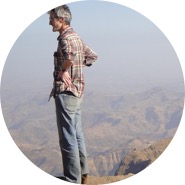 Since 2012 James has freelanced in America and the Horn of Africa. He has written about business, political unrest, humanitarian crises, coffee, fashion, film, rap, religion, and much more. His work has appeared with the , BBC, Guardian, Al Jazeera, Foreign Affairs, CNN, Deutsche Welle, South China Morning Post magazine, among others. He writes in an effort to try get a handle on what it is all about. For now the answer remains elusive.

Developing African countries like Ethiopia that have shaky healthcare systems and less ability for social distancing seemed ripe for disaster as COVID-19 spread round the world. But so far African countries have generally fared far better than more developed, richer countries, experiencing a much lower rate of infections and deaths from the virus. What is going on?

As the spread of COVID-19 accelerated around Europe and America – while I contemplatively gnawed my lip in Texas pondering the situation there and that of my family and friends back in the UK – I couldn’t help my thoughts and fears also turning toward Ethiopia.

Based on my previous years living in its capital Addis Ababa and working as a freelance journalist, in addition to the developing country’s problems, even its merits that I fondly remembered appeared to make the country particularly vulnerable to COVID-19. I knew what a tactile and social society Ethiopia has: people of all ages are always kissing, handshaking, hugging, even bumping shoulders together (an act steeped in the solidarity of rebels who toppled Ethiopia’s former military dictatorship in the early 1990s). A basic daily greeting on the street can include an extended choreography of tactile greeting – laced with opportunities for transmitting a virus.

Furthermore, maintaining personal space in a rambunctious and teeming city like Addis Ababa is next to impossible: the essential blue and white minibuses that ferry people around the city have to fill up every available space, squeezing at least double the normal number of people onto any given row of seats. I well remember days, perhaps weeks, of accumulated time in those workhorses squashed up against windows or pinioned between other passengers having to sit along the space beside the sliding minibus door.

On top of all this, like many African countries, Ethiopia’s healthcare system remains weak and overstretched at the best of times. Ethiopia has just one doctor for every 10,000 people, according to the World Bank – a ratio that is half that of neighboring Kenya, four times lower than Nigeria and nine times lower than South Africa.

In short, I thought COVID-19 would spread like wildfire in Ethiopia, decimating the country and population. But things haven’t turned out like that. Not in the slightest. Ethiopia reported its first COVID-19 coronavirus case on March 13. Since then, Ethiopia has fared remarkably well, almost to a baffling, freakish degree. Of the 1063 confirmed COVID-19 cases in Ethiopia – as of May 30 – there have been 208 recoveries and eight deaths. Meanwhile, the positive-test rate remains below 1 percent – an enviable statistic compared to many countries: in the US at the start of April that rate reached 21 percent.


Such muted and surprising trends have occurred across most of Africa, which though it contains 17 percent of the world’s population, had less than 2 percent of confirmed cases of COVID-19 by mid-May. In the preceding month, the number of reported cases was taking about two weeks to double compared to the US where until recently cases were doubling about every three days. There are countries such as Mauritius, Namibia and the Seychelles that have gone for two weeks without reporting a new case since the outbreak started.

It all gets me thinking of Pliny the Elder, the Roman scholar who remarked: “Ex Africa semper aliquid novi,” giving us the saying and idea of “Out of Africa always something new” – the continent’s propensity for evoking the mysterious and unexpected is being borne out in relation to its experience of COVID-19.

There are varying theories as to why the spread of COVID-19 in Africa has proceeded so slowly and differently, while no one really knows what may yet happen. There is relative agreement that what proved crucial in slowing the spread was the swift introduction across most of the continent of containment measures. African countries implemented lockdowns far earlier than developed countries in the West did. Ten days after Ethiopia had its first COVID case, the Ethiopian government announced the closure of the country’s land borders on March 23. By April 8, the government declared a five-month State of Emergency (SOE) to help limit the spread of the virus.

At least 42 African countries had implemented lockdown by the end of April, with 38 of those having been in place for a minimum of three weeks. It is also thought that Africa has been helped by its unique socio-ecological context. Africans tend to travel less than those in more developed countries due to the sparse road networks. Also, lower rates of infected people dying than in richer countries is being attributed to the relative youth of African populations. Sixty percent of Africa’s 1.25 billion people are under age 25 – the youngest population in the world. Of Ethiopia’s 105 million people, 40.5 percent is under the age of 15, according to USAID.

But Ethiopia, like the rest of Africa, is unlikely out of the woods yet. It is estimated that Ethiopia’s number of COVID-19 cases will peak in June or July, leaving plenty of time for the situation to change dramatically. There are already increasing cases of community spread, with officials warning that complacency could undermine containment. As a result, despite current low numbers, the fear remains that Ethiopia’s weak health infrastructure could easily become overwhelmed by a major surge in cases.

“Many of us fear the worst of Ethiopia’s coronavirus situation is yet to come [given] the government’s and the public’s half-hearted gestures seemingly slowly dying out,” Elias Gebreselassie, a freelance journalist based in the capital Addis Ababa, told me in an email, adding: “The mood of many people is strangely semi-fatalistic with lacklustre adherence to private and public health measures.”

While the government has been swift to implement action in the capital (including the mandatory wearing of face masks in certain situations, banning handshakes and all meetings of four of more people, and closing schools, bars, cinemas, theatres and nightclubs), the effective coordination of COVID-19-related counter measures around the entire country and throughout its huge population (the second largest in Africa) is another matter.

Ethiopia is a deeply religious country and the world’s second-oldest practitioner of Christianity after Armenia. As a result, there are reports that many Ethiopians assume God will protect them from the disease, an outlook susceptible to confirmation bias due to the small number of local cases so far.

“People are concerned, and at the same time much of the public appears to be downplaying the seriousness of the disease, which is making the days ahead both scary and problematic”, says Elias Meseret, another Addis Ababa-based journalist.

For now, most of COVID-19’s impact in Ethiopia is unrelated to public health. Civic society and the economy have borne the brunt of its fallout thus far.

After COVID-19 arrived in Ethiopia, there were reports of abusive behaviour towards foreigners – with foreigners blamed for bringing the virus into the country – including a small number of cases of assault. The situation led to the Ethiopian government having to issue a stark warning to citizens to refrain from attacking foreigners.

Ethiopia’s important flower export industry has taken a huge hit. After Europe was hit with the coronavirus, the demand for flowers plummeted and the price dropped by more than 80 percent. A total of 150,000 employees in this industry are also at the risk of losing their jobs. Ethiopian Airlines, the country’s flag carrier, reports that it’s working at only 10 percent of its capacity, and has reported a loss of $550 million in the months of January to April 2020. The United Nations Economic Commission for Africa estimates that COVID-19 will shave 2.9 percentage points off of Ethiopia’s economic growth for fiscal year 2020.

A developing country like Ethiopia can ill afford such economic slumps. The country’s fault lines were already looking more precarious before COVID-19 arrived, after more than two years of protests over long-term grievances such as human rights abuses, government land seizures, the monopolising of business and economic interests by a corrupt elite, and political marginalisation of opposition groups. Those protests were spearheaded by the young and typically unemployed and precipitated the declaration of two States of Emergencies to restore peace and security. Now, more than 26 million Ethiopian students are affected by school closures due to the coronavirus, according to UNICEF.

The current prime minister, Abiy Ahmed, who came to power after the former prime minister resigned because of those protests, is now trying to position himself as a unity candidate whose reforms can replace repression as the necessary glue holding Ethiopia’s often fractious federal regions together. Those important reforms, while garnering significant international praise – Abiy was awarded the Nobel Peace Prize last year – are far less likely to succeed if Ethiopia’s economy implodes.

Many African countries are walking a similar economic tightrope, with less capacity than richer developed countries to ride out economic downturns. Hence already a number of African governments are in the midst of loosening lockdown restrictions as they try to balance the harm of COVID-19 with that to their economies and more broad public health. Studies are indicating that in some African countries the negative knock-on effects from COVID-19 for treatment for the likes of HIV, tuberculosis and malaria could be just as bad as the impact of COVID-19 in terms of years of life lost.

The potential problem with the above, though, is that unlike developed countries which are easing lockdowns after peaking in new COVID-19 cases, African countries could be easing restrictions while case rates are still accelerating – a potentially volatile and dangerous combination.

Ethiopia and the rest of Africa may yet buck the trends seen around the rest of the world and come out of this miraculously enough to make Pliny the Elder proud and to further substantiate his point. Or, instead, the continent may be experiencing a slower pandemic, which still contains terrible risks and potentially cataclysmic outcomes.