Patient XXXXX: Not the first, but not the last 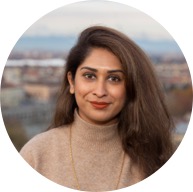 Born and raised in Pakistan, Omaina has spent the last eleven years of her life moving around from country to country. An avid reader and a passionate feminist, she is an electrical and computer engineer by education and a Production Manager by profession. Since her hopes of becoming Prime Minister of Pakistan seem to have stalled, she aims to promote human rights through her writing and future work.

It is easy to talk about a prevalent culture of body-shaming and the rise of eating disorders. It is far more difficult to reconcile oneself to the knowledge that your own behaviour might fit the same patterns. What hits even harder is knowing that you may have contributed to this unhealthy culture as well, propagating the unhealthy views to others. Here I talk about some harsh self-truths that recently dawned on me.

There is a story I tell in the family laughingly but also in an advisory manner. I recount how I had spent the 17th summer of my life locked up in my room, mindless of the time, dazed by the heat, essentially starving myself. It was easy. I literally did nothing. All day would be spent sleeping or dozing. By the evening I would wake up, take another hour or so to come out of my room, and eat a light breakfast. The timing would throw off the rest of the meals. I would not be hungry at dinner and would have missed lunch. All night I would be up, reading or watching TV, suppressing hunger pangs. Come dawn, the cycle would repeat itself. I took part in no activity and the resulting weakness from lack of food was easily managed by simply staying in bed all day.

By the time my 18th birthday rolled around, I had lost all my baby fat – and then some. I had lost the dreaded “heavy” stigma. And while I didn’t realise it, I had also lost my enjoyment of food. For someone with my skin tone that I could not change, and features that I would take another couple of years to grow into – it was a mark of success. So, what, if I was not light-skinned. I was moderately tall, and I was skinny. That distinction would become part of my identity.

Managing my weight and remaining as skinny as I could has always been a point of control for me. This was one aspect of my physical appearance that I could easily manage and match to societal expectations. I have taken pride in wearing XS sizes. I have enjoyed people telling me how skinny I am. I have spent hours upon hours grabbing my belly “fat” and trying to will it away. I have looked at my photos in swimsuits and found unsightly rolls. I have spent almost ten years of my life insisting that I simply have a smaller stomach, lower appetite, and just don’t enjoy food that much.

What exactly are eating disorders? Anorexia and bulimia are phrases that are thrown around too nonchalantly and interchangeably sometimes. People suffering from anorexia nervosa display some characteristics that can be used to diagnose the disorder. Severe anxiety concerning being “fat”, obsessive exercise and/or forceful purging of the body are some of the behavioural aspects. Some of the physical symptoms can include irregular menses, visible damage to hair, nails and skin, constipation, and drop in basal body temperature. In addition to these signs, if a person has a BMI ranging from 16-16.99 kg/m2, they will be diagnosed with moderate anorexia. The severity of the disorder is categorised as inversely proportional to the BMI value (2).

Bulimia is characterized by the consumption of an amount of food in a specific period that is larger than expected. This is accompanied by a feeling of lack of control over behaviour. This consumption is then followed by “regulatory” behaviour, motivated by a fear of perceived weight-gain. This behaviour can include use of laxatives and self-induced regurgitation. Severity will be measured against the frequency of these episodes (2).

Binge-eating is also characterised by excessive consumption of food during a specific period, with marked feelings of distress caused by it (2). These are some of the most common disorders with multiple atypical variations.

Some of the causes for these issues include the media’s portrayal of desirability (3). Skinny is attractive and attractive means skinny. The other major factor is learned behaviour and direct influence from family and peers (3).

Teasing, comments about weight and body structure, and observed behaviour from friends and parents can directly contribute to the development of a negative self-image or an eating disorder. Both boys and girls can be led to believe that they will be better liked if they had a different physique. For girls, it tends to be a focus on losing weight. For boys, there is an emphasis on putting on body mass and musculature. For both, it can lead to years of suffering (3).


I was never bullied outright for my weight. Once, talking as teenage girls do about their bodies, I commented on my clavicles. A friend burst out laughing, saying “Your collar bones aren’t prominent you just have fat there!”. Another friend routinely referred to me as chubby or big in a loving, joking manner. When I came back from my first year of college having put on a few pounds, the first thing my friends told me was that I was fatter than before. I cannot describe the damage I inflicted on myself reading the Sweet Valley High series, with its 5’6” (1.67 m) tall heroines who were a size 6. For the longest time I took this as a standard of perfection. While I never matched them in height, topping out at 5’5” (1.65 m), at my skinniest I have been a size 0.

Worst of all, when my sisters asked me for advice on how to lose weight, I would recount that story of my 17-year-old self. Being around me must have been a miserable experience. High on the pedestal of my own physique, I constantly told one of my sisters to lose weight. I told her to control her diet. I cajoled, I yelled, I advised. And I probably caused extreme damage.

Exercise has been both my bane and my salvation. Once I discovered exercise, I found a way to kick-start my metabolism and burn even more calories. I hiked, I ran, I did the insanity workouts. And all this time I did not increase my food intake. It was so easy to justify my physique and I was complimented more than ever for it.

Becoming more and more competitive about my workouts, I did find another outlet for my control. I slowly started eating more as I realised, I needed the energy for upping my game. As I celebrated my 30th birthday, I weighed more than I had in the past 12 years. Most of it was muscle. For the first time in my life, I could not encircle my ankle with one hand. I now identify with how long and how well I can work out. I love feeling my muscles become stronger and more noticeable. And yet… I still got extremely upset when I had a little trouble fitting into my size S jeans.

The words “eating disorder” did not apply to me. I never crossed that BMI line that would put me in anorexia territory. Being obsessive about one’s physique and never thinking of yourself as skinny enough, is – while plenty damaging – commonplace behaviour, unfortunately. What I fear is having traded one vanity for another. I spent so long measuring my self-worth based on the smallest size I could fit into. I do not want to spend another 10 years imagining that running a marathon will make me a better person. I have not yet found the right tools to deal with this. In the meanwhile, I want the cycle of shame to end with me. I will no longer equate being skinny with being “good” and I will not spread this message either. One day, I will learn to love myself with all my baggage and scars and rolls. Until then, I will make sure that no one else will have any cause to not love themselves because of something I say.

It is easy to agree with all the social media campaigns to stop body shaming. I follow Ashley Graham on Instagram and commend Rihanna’s SavagexFenty fashion show which was very size-inclusive. I stopped purchasing anything from Victoria’s Secret when their CEO’s transphobic, sexist and body-shaming remarks were made public. I like all of Jameela Jamil’s body-positive posts. At the same time, I was asking my sister when she would rejoin the gym. I was silently looking at “heavier” people, thinking that I would never be able to deal with it if I put on weight. I was actively avoiding wearing some of my clothes, because I was scared that they would no longer fit me, and I would get upset about it. Agreeing with an idea in principle is one thing. Internalising the same idea is entirely another. It is a journey. A journey that requires a lot of introspection and work. Maybe on your own and maybe with a therapist. I would invite everyone reading this to sit back and think about their views and how actively they live them out in their own lives. You may be as surprised at the answers as I was.