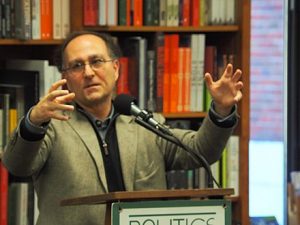 Robert is Professor of Philosophy at Vanderbilt University in Nashville, Tennessee, USA. He is a regular contributor to the blog "3 Quarks Daily" and his current research is focused on democracy, polarization, public ignorance, and egalitarianism.

Democracy imposes a substantial moral burden on citizens. They must regard one another as political equals, even when they disagree deeply about justice. Each side is likely to see the opposition as not only wrong about the issue, but on the side of injustice. How can citizens both stand up for justice and yet embrace a political arrangement that gives injustice an equal say? Political sympathy, a disposition to recognize in our opposition an attempt to live according to their conception of value, is proposed as a way to lighten democracy’s burden.

The frustrations of democracy are familiar. Politicians pander, surrogates spin, opponents object, and citizens pick sides much in the way that they attach themselves to sports teams. Meanwhile, the spectacle of democracy seems to obstruct its point, which is competent and representative government. Careful reflection on the common good tends to get lost amidst the politicking. Yet as citizens we have a responsibility to try to sort through all of the noise so that we can inform ourselves of the issues of the day and exercise our political power wisely. We typically cannot count on our fellow citizens to satisfy this duty. Accordingly, the task of collective self-government exposes us to a great deal of irritation.

What’s more, when our side loses at the polls, democracy’s only consolation is that we may continue working on behalf of our political convictions. We mustn’t resign or withdraw, but instead turn the page and begin anew. Democratic citizenship takes persistence. In both emotional and practical terms, democracy is not only frustrating, it’s also exhausting.

Yet democracy is demanding in another way as well. Democracy is self-government among equals. This means that when it comes to political matters, no democratic citizen is required to defer to another’s say so or acquiesce to their opinions. Political equality means that we each get to make up our own minds about politics. Accordingly, as I emphasize in my new book with Scott Aikin, Political Argument in a Polarized Age (1), democracy runs on political disagreement.

And here a difficulty lurks. When it comes to large scale political decisions, we tend to regard our opponents as being not merely on the wrong side of the issues, but on the unjust side. We thus are bound to see our political rivals as not merely wrongheaded or mistaken, but as opposed to justice itself. It is natural in such cases, then, for us to grow contemptuous of our opposition, to regard them as irredeemably failed, benighted, and depraved, to see them as a threat.

However, democracy requires us to see our fellow citizens as our political equals, people who do not merely get an equal say in political decision-making but are entitled to an equal say. This of course is easy among those who agree. But there’s no easy way to regard our political opponents as equal citizens with an equal entitlement to political power. After all, we tend to see them as advocating injustice. It’s no wonder, then, that democratic politics tends to be so noxious.

But that’s the burden that democracy imposes on each of us. We are required to recognize the political equality of our fellow citizens, even when they are our political adversaries. We must acknowledge that they are entitled to an equal political say even when they hold views that we regard as unconscionable. Moreover, when our opponents prevail at the polls, we must hold that it is legitimate for democratic government to enact the policies they favor.

Democracy’s burden is undeniably weighty. How can one both stand up for what’s right and yet acquiesce in an arrangement that gives injustice an equal say? How can one regard it as legitimate for a government to enact unjust policies? In most contexts, these attitudes amount to moral complicity. Yet if we give up on the idea of seeing our fellow citizens as our equals, we abandon democracy. We relinquish the idea of a self-governing community of equals and embrace a view of politics as strictly a matter of imposing one’s will on others. Maybe democracy’s burden is more than we can bear?

In working through democracy’s burden, it might be helpful to think of democracy as requiring of its citizens a kind of political sympathy. In its familiar form, sympathy requires fellow-feeling and a degree of emotional concern for the other. But in its political version, sympathy requires only that we see our opponent’s political views as an expression of their sincere attempt to think clearly about politics, to act in the office of citizenship according to their best judgement. Democratic sympathy allows us to regard our adversary’s views as unequivocally flawed and in need of decisive rebuke. But it requires that we resist the tendency to see our opponent’s flawed politics as the entirety of who they are. In condemning the other side’s politics, we must not condemn them as people. In seeing their political commitments as the result of an attempt (however flawed) to think clearly about politics, we keep ourselves mindful of the fact that underneath the politics lies a mixture of values, aspirations, and factual beliefs, as well as an attempt to live according to one’s best judgment. This perspective not only helps us to see our adversaries as redeemable rather than as irrevocably corrupt, it can also remind us of our commonality. After all, thinking clearly about politics is difficult for everybody.


The broader challenge lies in the fact that our societies are currently arranged in ways that undermine democratic sympathy. As I have argued in Overdoing Democracy (2), the social environments we inhabit encourage us to see political affiliation as the defining feature of our fellow citizens (3). As a result, we increasingly interact only with others who share our partisan identity and we also are growing more prone to regard those who do not share our politics as depraved (4). The upshot is that political affiliations saturate the whole of our social world, leading to a de facto segregation of the democratic citizenry into partisan tribes with distinctive lifestyles (5).

This means that the crucial virtue of democratic sympathy cannot be cultivated through political engagement. If we are to enhance our capacity to bear democracy’s burden, we must see our fellow citizens as something beyond their political identities. The way to do this, I argue, is to construct social spaces where our political differences are not suppressed, but irrelevant. I emphasize that the needed modes of interaction must be built, as existing social environments are already saturated with partisanship. The way forward is to conduct a simple experiment: try something new, engage in a social activity that you sincerely believe does not express your political identity, and see what happens. In my own case, this has led me to a local music venue that specializes in Bluegrass, a genre with which I am unfamiliar. I have reason to suspect that the others who attend these performances are politically unlike myself, but our interactions are focused on discussing the music. I’ve learned a lot from these discussions, not about politics but about the nuances of the music. I can no longer regard the other patrons of the venue as wholly alien or depraved, despite the fact that our political differences are significant.

The larger point is that there can be no single recipe for cultivating democratic sympathy. We each have to find our own way to engage with others in activities in which politics has no place. Such activities are essential to democracy, not because democracy requires us to perpetually “reach across the aisle,” but rather because we can bear democracy’s burden only when we recognize that there’s more to our collective life than democratic politics.

To read more on democracy, its past and future challenges, check this collection of articles:
What we can learn from ancient Greek democracy – by James Kierstead
The future of democracy – by Adam Wakeling