Portrait of a mathematician in love with the art of writing 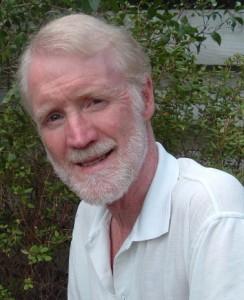 David is an Australian writer. He is a former teacher of mathematics and English. He divides his time at the keyboard between poetry, short stories, and newspaper articles.

Mathematics is a discipline centred on the logical progression of carefully constructed steps, yet it can also be an exhilarating free-for-all. These diverse elements inspire my approach to imaginative writing, whether it involves the narrative of a story or the various styles that poetry can take. This article explores how that relationship works, with particular reference to the influence of mathematician Charles Lutwidge Dodgson, better known as Lewis Carroll, the author of Alice’s Adventures in Wonderland.

Mathematics, which dominated most of my working life as a teacher, is an endlessly fascinating discipline. It is highly structured, requiring strict application to logic and detailed sequential steps, but it can also be something of a wild ride, demanding leaps of imagination and excursions into all manner of weird and wonderful corners.

Which, of course, can also describe my other fascination: the craft of writing.

So when inspiration strikes, and I’m off on the trail of a ripping yarn, the logical part of my brain kicks in and helps me to navigate the treacherous waters of plot. If something doesn’t quite hang together it nags at me until I’ve sorted out the inconsistencies and can trace the smooth flow of reason from beginning to end – just as a mathematician begins with a question and deconstructs it through a series of methodical steps to reach an answer.

But difficulties arise when it comes to that well-known aphorism for writers, ‘Show, don’t tell’.

Mathematicians have a necessary obsession with detail. There’s no place for vivid imagery or complex plot-lines, particularly when writing textbooks. Students aren’t interested in theory that deliberately omits significant elements in order to encourage the creation of individual interpretations, nor are they impressed by a solution that suddenly stops mid-stream, leaving the conclusion something of a mystery. It has to be all there on the page, spelt out in black and white, every “i” dotted and every “t” crossed. The dramatic devices so beloved of writers, the little touches designed to stimulate, tease and intrigue, would leave a mathematician hung, drawn and quartered by hordes of rampaging students.

When grappling with this tension between focus on detail and ‘show, don’t tell’, one of my inspirations is Charles Lutwidge Dodgson, the 19th-century English mathematician who wrote (among other mathematical texts) Euclid and His Modern Rivals (1). He’s better known by his pen-name, Lewis Carroll, the author of Alice’s Adventures in Wonderland (2) and Through the Looking Glass (3). It is tempting to speculate that the choice of a pseudonym might have been related to his own sense of conflict between mathematics and literature, but the reality is more prosaic. It was simply a case of wanting to keep his personal life private. The stories about Alice originated as tales he told to a young Alice Liddell, the daughter of Henry Liddell, the Dean of Christ Church, Oxford, where Dodgson was a mathematics lecturer.

Dodgson as Carroll was able to embark on a marvellous journey into a world where he could indulge his passion for logic puzzles. It’s intriguing to see a mind that has been disciplined to reason leap into a realm in which chaos reigns. He not only enjoys that freedom, he revels in it, and keeping the following exchange in mind has led me down many interesting paths:

Precisely. To a mathematician words cannot be ambiguous, but to a writer there is always the challenge to yoke language to new and tantalising images. The ultimate example of this is Dodgson’s wonderfully nonsensical Jabberwocky, which begins:

Twas brillig and the slithy toves
Did gyre and gimble in the wabe;
All mimsy were the borogoves,
And the mome raths outgrabe.

In true Humpty Dumpty fashion, we learn that “brillig” means four o’clock in the afternoon, the time when you begin broiling things for dinner. The gloriously onomatopoeic “slithy” means lithe and slimy, while “toves” are something like badgers, something like lizards… and something like corkscrews. Here is a writer having fun: Dodgson was able to harness his mathematical background to his literary endeavours, and his success makes the very difficult task of playing with logic look easy. Instead, I’m constantly trying to resist the inner pressure to explain, the driving urge to shout: “Look, this is what I’m trying to say, and just to make sure you get the point, here it is again!”

Part of the answer to this tension can be in switching genres. For some, that might mean turning to music. British mathematician and musician Professor Marcus du Sautoy refers to the link in these terms: “Rhythm depends on arithmetic, harmony draws from basic numerical relationships, and the development of musical themes reflects the world of symmetry and geometry”. But for me, lacking musical talent, I enjoy writing poetry. Traditional verse forms (with Jabberwocky as an example), organized by rules of rhyme and metre, lie at one end of the spectrum. When the mood suits, it can be relaxing to search for these literary patterns, rather like putting together the individual pieces of a complex jigsaw puzzle in which the overall shape is clearly defined. As du Sautoy says, rhythm depends on arithmetic, so, at the most basic level, constructing lines of traditional verse involves counting syllables to ensure that a consistent rhythmic pattern is maintained. This patterning can also be at the heart of writing song lyrics, another example of the interrelationship between mathematics, music, and poetry.

Shirley Dent, Associate Fellow of the Academy of Ideas in Britain, extends the mathematics and poetry connection further in observing, “Both poem and equation are indeed spiralling mixtures that take us on journeys of our own making – maths and poetry are not truths waiting to be discovered at the end of a spreadsheet, but man-made languages that open up our horizons of understanding”.

This refers back to the “wild ride” of my opening paragraph, and leads away from traditional rhyming verse to the other extreme of the poetry spectrum, free verse. And this is where I struggle most with the logic demon. Breaking the shackles of structure, letting loose both form and imagination, is extremely difficult, and I cannot completely escape the bonds. The American poet Robert Frost once dismissed free verse with: “I’d just as soon play tennis with the net down” (4), and that’s as good a description as any because there are no rules. The standard, easily recognisable structure of traditional verse disappears, replaced by whatever linguistic and visual cues the writer chooses to employ. The very layout of the poem on the page becomes part of the poet’s armoury, harnessing sight and sound in order to provoke a response.

But for me, even as I play with organic form, there still has to be some line of logic. The rational part of my mind will not let me produce a work that is merely a collage of images, an outpouring of emotion where the strength lies only in verbal dexterity and vividness of expression. At their most extreme, these characteristics can lead to results so esoteric and obscure that interpretation becomes tricky, difficult and perhaps alienating. And that flies in the face of my mathematical yearning for logic and clarity.

Writing thus becomes a battle between conflicting, yet overlapping forces. Mathematics contributes to the structure and potential narrative line of the poetry, while the poetic muse challenges the mathematician to undertake new adventures. Each field of endeavour inspires and informs the other – but also limits each other. Awareness of this tension is simultaneously a source of frustration and a challenge. Returning to Frost’s tennis metaphor, imagine playing the game when your eyes tell you the net is no longer there, but your natural instincts keep insisting that it is.

So this particular mathematician faces a problem with no clear solution in sight, only the ongoing and fascinating process of exploration and experimentation, just like Alice in her wonderland.