Overtired and a little heartbroken 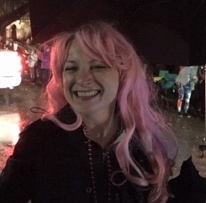 Hynden is an actress and writer living in Los Angeles.

I don’t have to tell you that life has become even stranger in the lingering pandemic of 2021. This is the story of an old man I saw lose it at Staples. From my place behind him in line, I observed not only his generational distress, but signs of a new, more potent urban alienation. This essay examines personal and technological disconnection in a masked and anonymous world, our desire to help those who need it, and the reasons we don’t.

I was already feeling unstable when I went to Staples. Were it a social media post, (which, gratefully, real life has not yet actually become), I would have labeled my current mood as “overtired and a little heartbroken,” sad face emoji, et al.

I had just read a bad review of an audiobook I narrated. The author of said bad review posted it an hour after the book was released, so odds are that “Meghan” hadn’t listened to all twelve hours before publicly trashing me. Making matters worse, it seemed that “Meghan’s” bad review would be prominently on display forever, laying its vicious taint all over the vetted good reviews from credible sources. Ah, yes. There it would be, as permanent as Stonehenge, ready and able for all to read well into the next millennium, slapping me in the face in perpetuity.

Bad reviews hurt. I think we can all agree to that. But life goes on, and despite our states of woebegone, errands still need to be run. And while an office supplies store might not have been the ideal place to take my unstable feelings, the printing paper and the batteries weren’t going to buy themselves.

I entered under the orange-red sign, looping the mask elastic over my ears. Masking had once again become de rigur after the Delta variant set a new land-speed-record for doubling cases. That half the population (also known as those-of-whom-I-cannot-bear-to-speak) rejected getting a nationally sponsored, safe-making vaccination for the good of themselves and the rest of humankind was beyond me. But all signs pointed to peace in the Staples, as my fellow Los Angelinos were well back undercover.

I gathered my items among the fully masked shoppers and detoured down my favorite aisle to see if I might cheer myself up with a pen. Sadly, my melancholia refused the bribe, so I sighed myself in line to pay.

An old man was making a scene at the register.


Seeing someone so elderly in urban LA is like seeing a unicorn. It’s different. It grabs your attention. This poor man was skinny and sloped. His strands of grey hair were combed straight back and he could not, could not, could not get his credit card to work.

I wasn’t convinced he knew how to use the card reader. By the looks of things, neither was anyone else in line. Still and stoic, a single raised eyebrow between tinted eyeglass and hairline gave their true feelings away.

“No, not that one either, sir!” The little clerk had to shout so he could hear her through her mask and his deafness.

“I HAVE TWENTY-FIVE CARDS!” he snapped.

The old man was frustrated, and I could see why. This shit isn’t easy—none of it. Living in 2021 during the reorganization of the—what, the fourth wave of the pandemic? Trying to function in a newly faceless, cashless society? Now we were all masked banditos, holding him up with these strange new machines. “TAP MY WHAT WHERE NOW?” It’s demoralizing and exhausting. Heartbreaking, too—the lack of contact, the lack of connection, human or otherwise. Not even the electronics will connect. Bell Telephones used to jackhammer tones if the handset wasn’t properly replaced. It must have felt like the whole world was jackhammering him with disconnection, hanging up on him. And jacklit by new technology, he froze.

I looked at my compatriots in line standing stock still, silent as church. Most dipped chins to phones. The woman standing next to me had the fixed, wild look of exhaustion. Usually in LA we wear sunglasses to hide our spacey eyes, but hers were exposed. The rest of us were so covered by dark lenses, masks, and hats, we might have been manikins. Only our thumbs, perpetually stroking their screens, showed any sign of life.

I feel the need to defend us here. This checked-out silence is normative behavior in LA. We don’t do it because we’re unfriendly (although certainly some of us are), or that we’re entirely self-absorbed (although certainly some of us are); it’s that there are too many of us. With almost four million in the city of Los Angeles and thirteen million in the LA Metro Area, it’s not possible to make a human connection with everyone we see every day, so we shut down and shut out. We make our worlds smaller and more manageable by limiting our human interactions. We self-preserve by keeping our distance and we certainly don’t—as in do not—get involved with old men making scenes at Staples.

The woman with the spacey eyes blinked.

Then it hit me—I knew what to do! I’d pay for this man’s things! God, it would be so easy. What did he owe? I couldn’t see a total, but I didn’t care. I’d pay whatever he owed for his office supplies and set us all free.

“I have to help someone else now, sir!” she yelled back and left the old man huffing through his twenty-five cards.

“How are you today?” she asked with eyes crinkling signs of a smile. Boy, these Staples employees are good, I thought to myself. I checked the line for consensus but found none.

The old man muttered into his wallet. “IT SHOULD GODDAMN WORK, I TELL YOU. IT’S NOT MY FAULT!”

He turned to the side and I saw his face was bare. [Gasp!] The old man wasn’t wearing a mask! He was one of those-of-whom-I-cannot-bear-to-speak. Didn’t he know what the virus could do to him? Or was he one of the crazies who didn’t believe it was real? I instantly began to question his worldview, his politics, and his sanity. Right at a moment when I’d conceived of doing him a good turn, he was making it really hard for me to like him.

I dug deep and shook it off. Taking a breath, I decided I didn’t care. I’d pay for his stuff anyway.

“I can help you down here.” Another employee swept in and took me to the register just south of the action.

“THAT DIDN’T WORK EITHER? HUH? DO YOU EVEN KNOW WHAT YOU’RE DOING!?”

If he was frozen before, now he was hot for a fight. He was Howard Beale mad-as-hell mad. But Old Man v. Sweet Cashier wasn’t a good match. It was nothing I wanted to see. I really wished he’d stop yelling at her. She was helping him and being nice while helping. That’s not easy to do.

He was… enthusiastically unkind.

I winced and pooled my compassion. As the other cashier scanned my items, I searched for my voice. I knew it was there somewhere behind my mask. All I had to do was speak up. Speak up over the old man’s pseudo-abusive bellowing, through the statuary silence of the people in line, call attention to myself, and pay for his things.

Instead, I paused to reconsider.

I imagined his feelings. The last thing I wanted to do was insult his manhood. I’d known old guys like this; hell, I’d been related to a few. They’re proud. They’re proud in italics! And they don’t want your goddamn charity, thank you very little. They’re the decision makers, heads of the house, fighters of foreign wars, captains of industry!—at least, they used to be. With this fact in deep background, I knew my attempt at kindness could very well be misconstrued as an insult.

“Your receipt’s in the bag.”

Damn it! I had to act fast, but the truth was (honestly, selfishly) I was having a rather bad day myself. I paused to reconsider my feelings. They’d already been mangled once that day. I knew I couldn’t take another public flogging. My mother taught me well that doing good for others makes the doer feel good. But what if the old man, already up in arms, were to misunderstand and turn his rage on me? I’d be crushed like an aluminum can.

“Is there anything else I can do for you?” asked the clerk, confused as to why I hadn’t left.

Here it is—now! I thought to myself. Speak!

I shook my head and mumbled an inflectionless thanks, a big-city goodbye, and slunk off to the parking lot with my ream of paper and my stupid batteries. Another good intention kicked to the curb. I didn’t help the old man. I didn’t pay for his things. And though it certainly doesn’t excuse my lack of action, neither did anyone else.

I think we’ve all been everyone in this story: the old man, the one who wants to help, and the people in line. The trick here is—learning to break our silence before it erupts in alienated rage. How do we do that? How do we reach out beyond our biases (the old man wasn’t wearing a mask) and implacable social conventions (we keep our silence, we don’t interfere) to … reinvent interaction? To trigger connection in a time when it’s not possible to even see each other’s faces?

I don’t have an answer, if that’s what you were hoping. I’m just here to ask the questions.

Say … I was going to mention it earlier—and I absolutely could be wrong—but didn’t I see you there as well? Buying bubble-pack and staring at your phone?

When I got back to my car I was more heartbroken and overtired than before. I threw my crap in the back, slammed the door, and kept my mask in place. I didn’t want to catch a glimpse of myself in rearview or reflection, so I stayed a faceless LA-nobody. Backing out, I gave myself a bad review.

I signaled right and slowly merged. There was heavy traffic on the road to hell.