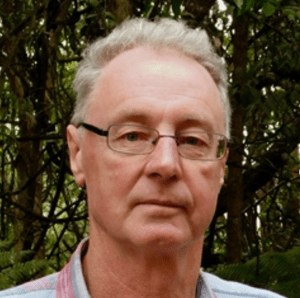 Darryl is an Australian urban ecologist and academic. He has spent his career exploring the many ways that humans and wildlife interact. He has published almost 200 scientific articles and seven books, including the first exploration of global bird feeding (The Birds at my Table, 2018). His most recent is an urban ecology memoir (Curlews on Vulture Street, 2022).

Urbanisation is having one of the most profound impacts on global biodiversity. While most species cannot cope with these processes, a small number have been able to reverse the trend, becoming extremely successful in urban environments. Studies of these species suggest that they share a variety of characteristics including behavioural flexibility and adaptive intelligence. Their capacity to adapt has led to speculation that some species may be diverging into urban and non-urban forms. This may be happening with urban crows right now.

At first, it seemed almost trivial, just another example of another animal turning up in an unexpected place in the middle of a city. A simple stick nest, soon to contain three eggs, had appeared on a ledge outside the glass wall of my colleague’s office. He called me when the birds responsible turned up. ‘They appear to be crows,’ he said doubtfully.

Our initial reaction related to the barely contained rage evident in the stance of the two adults staring furiously at us through the glass. Standing less than a metre from the nest, we couldn’t help but feel it was us violating the birds’ personal space. ‘I think I’ll work from home for a while,’ my colleague said, quite seriously.

Just a crow’s nest on the side of a building. Not as banal as that of a pigeon’s and certainly not as interesting as the peregrine falcons famously raising their brood while being live-streamed from a skyscraper in the CBD a short distance away. For most people, the prospect of crows joining the other species already regarded as a nuisance was hardly something to be celebrated. For me, however, this simple crow nest represented something potentially monumental.

My students and I had been studying the Torresian crows Corvus orru in subtropical Brisbane, Australia, for decades (1). It’s challenging work trying to investigate a species you suspect may be at least as smart as you think you are. However, persistence and a genuine respect for our study species had revealed that these birds were adapting startlingly well to life in the city. Unlike their country cousins, these urban crows formed large communal roosts as a way of exploiting the plethora of foods associated with humans (2), carefully selected the trees they roosted in to minimise risks (3), had one of the most complex vocalisations of any bird (4) and demonstrated an acute degree of neophobia – ‘fear’ of anything new – a behavioural trait we interpreted as being appropriately adaptive in the strange and often dangerous environment of a large modern city (5).

In all that time, two characteristics of urban Torresian crows had been continually reinforced: their innate risk-averse nature and their intolerance of being close to humans (5). It was, therefore, almost shocking to find a pair of these birds building a nest visually next to people, albeit through a glass barrier. On my building no less! I initially felt this to be a bizarre anomaly of little consequence; just a pair of inexperienced birds making an uncharacteristic mistake. A story of the nest in the media quickly showed this simplistic conclusion to be misguided. From the many responses to the news article, it became clear that similar incidents had been occurring on buildings throughout the region, but only in the past few years. All of the people I contacted said it was a new phenomenon, entirely unexpected. Something strange seemed to be underway.

Australia has five native corvids and every city supports at least one species. But this was the first time any of them had started nesting on buildings. It wasn’t the use of human structures that was noteworthy; corvids have long placed nests in a variety of constructions such as warehouses, electrical pylons and communications towers. But rarely near people. All of the new reports were in places where people could be seen close by the birds.

But why nest on buildings? One fairly obvious answer is that these sites are far less vulnerable to the impacts of weather. The peak of crow breeding in Brisbane coincides with the storm season and nest failure due to wind and heavy rain occurs in about a fifth of all nests located in the normal place in a tree. It is far too early to verify but so far, no nests on buildings have failed due to storms. If such differences in success between buildings versus tree nests were to become regular outcomes, selection for the new sites would be very likely (1). Moreover, it appears that the offspring raised on buildings are choosing similar sites themselves although this evidence is very limited to date. This may be the start of something important in terms of a species living in an urban environment. Possibly even of evolutionary significance.

Corvids – the family of crows, ravens, jays, jackdaws and magpies – have been one of the most successful groups of birds to have staged a gradual invasion of our habitat, cities. Although some corvid species have long been associated with people, in Europe especially, their global mass infiltration into urban areas started around the middle of the last century (6). All around the world, the local crows living in the nearby countryside began moving into towns. Not with pigeon-style audacity or tit-style familiarity but with corvid-defining stealth and strategy. This was a slow, deliberate, observant, risk-averse exploration, a genuine staking out of the human world by a clearly intelligent agent.


Urban areas are now the home for more than half of the people on this planet. This profoundly significant moment seemed to have happened sometime in 2007 (7) without most people noticing. For all of our previous existence as a species, humans have lived in small groups, often nomadic or at least migratory, following the resources needed for survival. Settling down in one place was a major shift – ecologically, economically and culturally – but once we stopped, we tended to stay put.

Becoming sedentary meant settling somewhere with all the necessary resources (8). Wood, water and meat in sufficient supply to begin. Such places were naturally the richest, most fertile and well-watered locations. Unsurprisingly, these places were hotspots for biodiversity as well, though most species were unable to persist as human populations increased (9). Nonetheless, the legacy of our choice of places to settle has meant that cities have more endangered species than elsewhere. A lot of work is now involved in attempting to allow these animals and plants – evidence of historical fertility – to endure in the scraps of remnant habitat that remains in and near many cities.

Cities are, indeed, the opposite of natural ecosystems. Net sinks of energy and materials, they are hot, noisy, poisonous and dangerous. They are constantly changing, often for frivolous or even wasteful reasons. Very few non-human species can cope with such chaos and stay away. Some species, however, see opportunities where others find only disturbance and stress. Cities offer countless productive chances for those willing and able to adapt. Those that take up this challenge share several crucial characteristics, including: already being abundant in the neighbouring landscape (10), having a generalised diet (with granivores being at a great advantage given the ubiquity of feeders)(11), demonstrating innovative foraging capacity and often belonging to groups with proportionally larger brains (12). Clearly, the latter two features go hand in hand.

One additional characteristic, however, can be regarded as a prerequisite for making the first steps into a human-dominated environment: the ability to tolerate the presence of humans. This has been assessed and measured in a variety of ways, but the most rigorous is estimating the so-called Flight Initiation Distance (13). This straightforward approach provides a reliable and quantitative assay of how an animal responds to people. For many sensible reasons, most species have a possibly innate fear of humans, a reaction that must be modified, dialled back or even completely abandoned if key urban resources are to be accessed. Hand-feeding squirrels, ducks or hedgehogs at the local park is an extreme illustration of this phenomenon although simply visiting a feeder in a suburban backyard is a more commonplace example. Animals can and do learn when it is safe to be close to or even approach people.

All of these attributes relate to urban crows, though, as usual, in more nuanced ways. Crows, wherever they occur, are among the animals least tolerant of humans. They are more likely to sit back at a safe distance and watch while the pigeons and ducks bicker unbecomingly over discarded scraps. Their reticence is not simply natural ‘reserve’; typically, they are appraising the situation and assessing the risks and rewards (14). They may gain less bread by coming down only when the people have left but they will have learned from watching and will have minimised the risks. They may act very differently if the nutritional quality was higher.

It may appear that attributing such skills and strategic thinking to crows is verging on old-fashioned anthropomorphism, the assumption that these mere birds are engaged in near human-level cognitive activities. Were these claims being made for almost any other taxa, such a charge would be valid. With corvids, however, we are dealing with an entirely different class of beast. Whether it is future-planning (14), long-term spatial memory (14), advanced tool use (15) and construction, the possession of language (14), awareness of ‘self’ (16) or complex problem solving (17), corvids continue to astound the scientists studying them. The only other non-human species demonstrating similar capacities are the apes, dolphins and several long-lived parrots (most notably the grey parrots from Africa, keas from New Zealand and cockatoos from Australia (17)).

These abilities make urban crows an obvious candidate for particular attention. Recent discoveries of significant differences between urban and rural populations of a long list of animals have sparked lively conversations about whether city living is leading to genuine divergence within these species. These changes can be morphological (the shape of beaks in numerous bird species, all common feeder users (18)) and behavioural (vocalisations altering in relation to noise (19)). Significantly, some of these changes have now been demonstrated at the genetic level, suggesting the possibility, at least, of the alterations being inherited by subsequent generations (20). At present, however, the number of studies and the limited number of species that have been investigated precludes strong conclusions but is generating an abundance of testable claims.

Whether these apparent differences between urban and rural birds is a form of adaptive microevolution – the first step toward speciation – or, more prosaically, evidence of behavioural plasticity, remains to be seen (10). But this very conundrum highlights a rich field for intensive investigations. Crows, especially of the Corvus genus, could offer the ideal group on which to focus such attention. Is Corvus urbanis a possibility? Indeed, are we about to see similar changes in a wide range of species? From the growing evidence, it appears that we may be about to share our habitat with plenty of non-human entities living among us on their own terms. We had better get used to it (21).