The health of Ha Long Bay 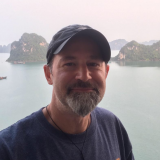 Mark graduated from Kent State University, OH with a degree in Fine and Professional Arts in 1996, but has always regretted not focusing on a discipline more closely related to creative writing as well. He is the author of “Mother Bear’s Journey”, a personal travel blog, and has contributed to “Mud Season Review”, an online literary publication as art editor. When not travelling the world, he lives in the Burlington area of Vermont, USA.

“The Health of Ha Long Bay” addresses personal concerns of negative environmental, ecological and cultural impacts on Ha Long Bay and the Cat Ba Archipelago, Vietnam as a result of boosted tourism in the area due to its declaration as a World Heritage Site by UNESCO.

The Cost of Fame as a World Heritage Site

“Beauty in paradise is not free. The Question is whether people… are prepared to pay the price in changing their habits and cultural traditions for that beauty to always be.” – Unknown author

I had the absolute privilege to live in Ha Long City, Vietnam for two months at the end of 2018. The view from my host’s 15th story balcony awarded me with a spectacular panorama of the adjoining bay, for which the area is so famous. It wasn’t easy to leave the balcony at times. The vertical, limestone karst monuments dotting the bay were declared a United Nations World Heritage Site, first in 1994 and then again in 2000, mostly due to fulfilling UNESCO’s (United Nations Educational, Scientific, and Cultural Organization) aesthetic criteria, but also for the preservation of over 500 million years of geological and geomorphological evolution. The bay comprises a total of 775 towering islands in a 434 square kilometer area. In 2014, the bay was nominated again, this time also including the western Cat Ba archipelago. This has added another 336 square kilometers to the original World Heritage Site.


The bay has always been a marvel worthy of visiting, yet it is undeniable that tourism has boomed in the area ever since the UNESCO World Heritage Committee first gave it some attention. Vietnam, especially from what I saw in Ha Long, is in the middle of an economic growth spurt. It is safe to say that the three million tourists visiting the bay each year certainly helps with that (1). To meet this high demand, there are over 530 cruise vessels on the bay, most of them exploring all 28 noteworthy destinations, including not only “Thien Cung” (Heavenly Palace) and “Sung Sot” Caves or the “Fighting Cocks” and “Burning Incense” islets, but also many of the dwindling “floating” fishing villages. Tourists can enjoy everything from kayaking and cooking classes to swimming and spelunking. Virtually every tour is funneled into Tuan Chau or Hon Gai Vinashin Port from Hanoi via shuttle bus.

As one would guess, a variety of enterprises have emerged to embrace this venture, and many pre-existing businesses have sought to invest in their cultural heritage as prioritized by the World Heritage Committee. The city immediately had the Ha Long Bay Management Board and its Municipal Center of Communication and Culture tackle the marketing of this gold mine, and the result has been great for the community. The city is relatively clean and it is reasonably safe. Education and recreation are on the rise, not to mention residential, commercial, and municipal real estate … and here is where I say “but…”.

“But…” I have seen no concrete parameters on water protection and preservation. While UNESCO has stringent policies concerning development projects on their declared sites, I have been unable to find how they enforce these policies. On a nice, sunny day, from fifteen stories up you can blatantly see the huge, rainbow-fringed petrol-plumes spread out across the surface of the water like big, shiny bruises. As you walk along the shoreline, you have your pick of all the scraps that didn’t sell at the garage sale, mixed with your everyday, plastic trash. This last problem has been addressed with heavier fines, yet the littering persists. What’s needed is a more effective way of enforcing these fines, more and more trash receptacles, more and more street cleaners to handle the trash receptacles, and a greater public awareness of the negative environmental and social impacts of littering. This last item on my agenda is my favorite, simply because the solution of any problem is heavily dependent on dialogue. The Vietnamese are already beginning to look at it in this light.


Furthermore, the government has begun to address the overall problem of water pollution, but with the traffic of over 500 tourist cruises in and out of the bay every day, on top of the usual boating, shipping, and fishing vessels, I feel that some regulatory actions should be taken by the powers that be, and possibly by UNESCO itself.  While the cruise ships are using a lot more horsepower than your less efficient 2-stroke and 4-stroke motors, there is still a substantial percentage of unburned fuel that ends up in the water, not to mention the average metal and chemical input added to the water column simply by having a vessel in the water. Eco-friendly and electric engine alternatives have already started to become popular with smaller outboard vessels. Of course, the transition to these alternatives will always be more expensive initially…but surely, something can be managed considering the tourism gross capital being earned off Ha Long Bay’s back. 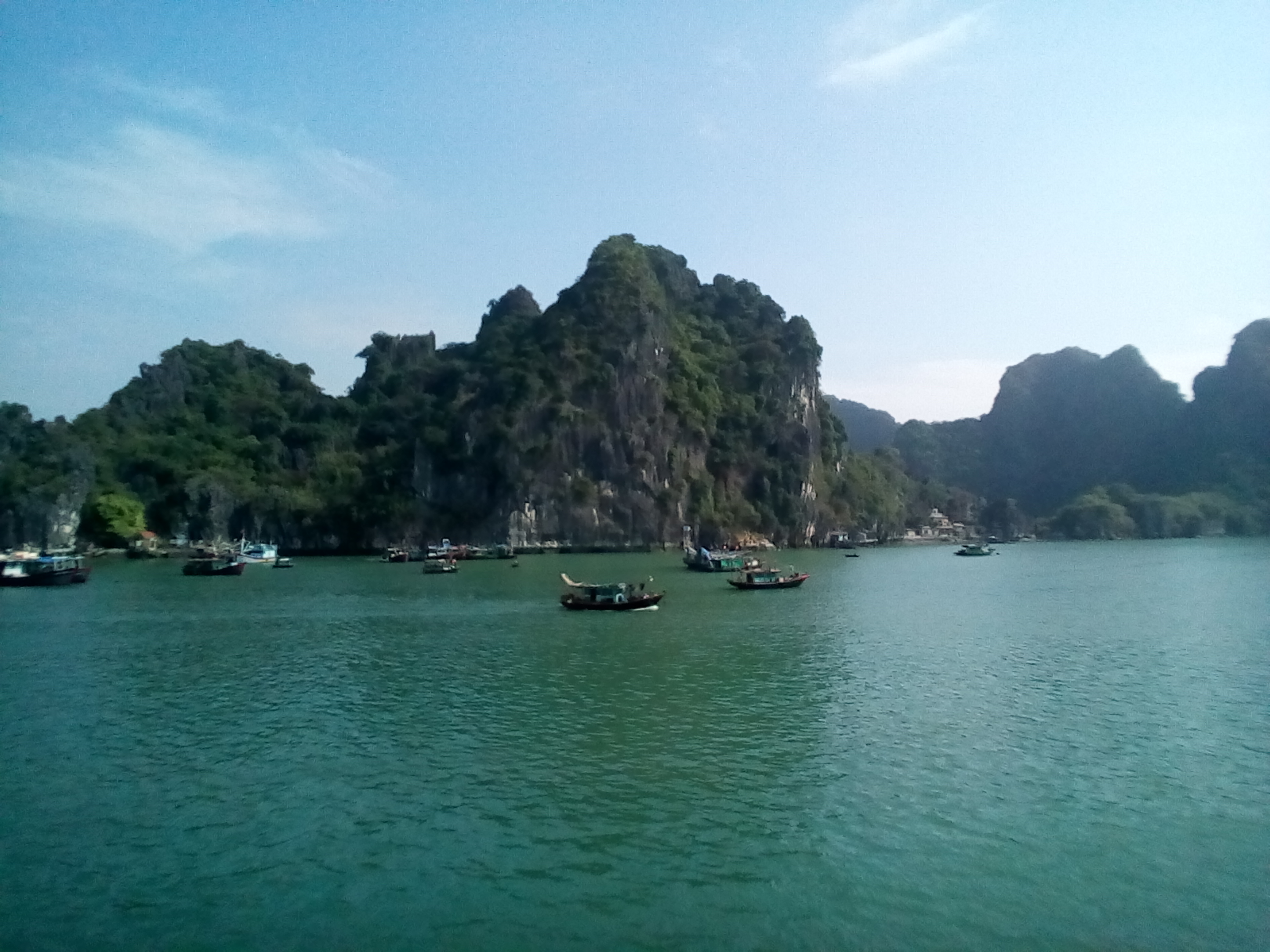 This kind of neglect occurs everywhere on the planet, and it all needs to stop. Perhaps it should not be allowed to happen in the first place when it comes to a World Heritage Site. As listed by the World Heritage Committee, Criteria ix. states:

To be outstanding examples representing significant, on-going ecological and biological processes in the evolution and development of terrestrial, fresh water, coastal, and marine ecosystems and communities of plants and animals.

Criteria x. goes on to say:

To contain the most important and significant natural habitats for in-situ conservation of biological diversity including those containing threatened species of outstanding universal value from the point of view of science or conservation.

If these criteria are to be upheld, should not the institution establishing the criteria adopt and enforce the regulations and restrictions necessary to uphold this criterion?
Be that as it may, I have to hand it to the Vietnamese and their community-based Cat Ba Langur Conservation Project (2) (Disclaimer: the Cat Ba Langur Conservation Project is based in Vietnam and operates solely within Vietnam, but it was set-up by and all the support for it comes from German organizations. Currently we are administered by the Zoo Leipzig with a large amount of support from ZGAP and a lesser amount of support from the Allwetterzoo Münster. In the past the Allwetterzoo and ZGAP were the primary sponsors). In fact, there are many ex-hunters of the white-headed langur (an endemic, endangered primate) who have completely reversed their roles. After many years of deforestation and poaching, these monkeys were counted at 53 individuals in 2000. One of the main issues facing conservationists was that a handful of subpopulations, scattered across several islands, consisted entirely of females. Despite this difficult hurdle, the population has grown back to 65 at present, but there are still 130 other species of terrestrial and marine life here that are in the red on the endangered lists, 21 of which are also endemic to the Ha Long region.


Lastly, there are four different “Floating Villages” in Ha Long Bay that have felt the impact of high tourism. How could they not? These people have been intrinsically tied to the ocean here since the early nineteenth century. Their boats serve as home, transportation, and occupation. Each village is made up of close to a hundred families that rely on their extended family network, tying boats together to weather rough storms or deal with rising tides, and casting off to drift across the bay in search of their next catch. Their culture is deep and layered, and wholly unique, but is being threatened by contemporary issues. One might imagine that the surge of tourism on the bay and its corresponding development have affected these fishermen’s way of life. Shifts in the local economic structure have forced changes in their source of income, not to mention a rapidly depleting fish population. The fishing villages have had to resort to taking advantage of all the newcomers to their home. Much of their daily yield, including a variety of homemade wares, has now been made available to tourists. The villagers’ entire lifestyle, as they endeavor to preserve it, has been put on global display.
Despite all these community-based efforts to protect threatened cultural identity and the natural habitats which surround it, this remains a critical time for the protection of water and air quality in the bay. There are always greener alternatives to business as usual, and just like the rest of the world, Vietnam must adapt their methods of operation to a more sustainable system, which will in itself generate more jobs on top of the already-booming tourist industry. This is my personal plea to the Ha Long community with the help of UNESCO. By all means, protect your rich and colorful cultural heritage: but you must also continue to focus on your home’s beautiful and diverse natural heritage.

Note: The article has been corrected with the help of Neahga Leonard, the project direction of the Cat Ba Langur Conservation Project.

One thought on “The health of Ha Long Bay”