The digital war on Palestine: How online censorship shapes the narrative about Palestinians 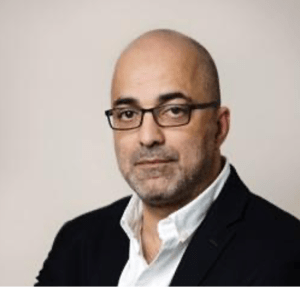 Nadim is a social entrepreneur and digital rights defender. He is also the founder and executive director of 7amleh - The Arab Center for the Advancement of Social Media, a Palestinian digital rights organization. Nadim is also a senior policy analyst for Al-Shabaka: The Palestinian Policy Network. For the past 20 years, he has worked on community development issues.

The ‘war of narratives’ is a key feature of Israel’s system of control over Palestinians, and the Palestinian narrative is often erased completely from traditional media coverage. Social media platforms have allowed Palestinians to bypass traditional forms of media and reach a global audience.  However, familiar tactics used in the offline world to silence Palestinians and censor criticism of Israel are now being deployed in the online world.

When the late Palestinian scholar, Edward Said, remarked that Palestinians are denied “permission to narrate” (1), he was referring to the ways in which the Israeli authorities and the international media silence Palestinian voices and prevent them from speaking about the reality of their lives under Israeli oppression. As a result, the Palestinian perspective is often completely erased from mainstream media coverage concerning Israel and Palestine.

In recent years, social media platforms have given Palestinians the opportunity to circumvent traditional media outlets and share their narratives with a global audience. Social media platforms are also a vital tool for organizing, movement building, solidarity, and campaigning. However, the war of narratives has continued within the digital world, and many familiar tactics are being utilized to achieve the same goal of silencing Palestinians and censoring criticism of Israel.

The impact of social media

In May 2021, Palestinian activist Muna el-Kurd posted a video on Instagram of an interaction she had with an American-Israeli settler, who was residing in part of her family home in the East Jerusalem neighborhood, Sheikh Jarrah. The world watched as the settler told her, “If I don’t steal it, someone else will.” The video went viral and immediately brought global attention to Israel’s ongoing efforts to ethnically cleanse Palestinian neighborhoods in East Jerusalem. The incident sparked a wave of global solidarity, whereas previously Israel’s treatment of East Jerusalem Palestinians had gone largely unreported by the mainstream international media.

The success of Muna el-Kurd’s video took Israel by surprise. The government has long recognized the potential of social media for drawing attention to the Palestinian cause. Consequently, the Israeli authorities have tried for many years to prevent Palestinians from using digital platforms as a means of communicating with the rest of the world and documenting the human rights abuses they are subjected to.

Since 2015, the Israeli Ministry of Justice’s Cyber Unit has submitted tens of thousands of removal requests to Meta-owned Facebook, according to the Office of the State Attorney’s annual reports. In 2016, Facebook began having regular meetings with senior Israeli government officials, leading Ayelet Shaked, the Justice Minister at the time, to claim that Facebook was compliant with 95% of their removal requests. In 2022, the amount of removal requests submitted to Meta by the Cyber Unit had increased by 800%.

The Israeli government has recently sought to strengthen its abilities to remove Palestinian content and transform its requests to social media companies from voluntary to legally mandated. At the end of 2021, the Israeli Ministerial Committee for Legislation unanimously approved the controversial Incitement on Social Media Bill. Israeli lawmakers claim the bill, dubbed the “Facebook Bill,” will allow the government to remove user-generated content that they consider to be “incitement” or “causes harm” from social media platforms, such as Twitter, Facebook, and Instagram. The law will also allow the Israeli authorities to block websites, including news websites, that do not comply with their restrictions. A recent report found that Israeli incitement against Palestinians is not taken seriously by the authorities, with much lower conviction rates and delays in indictments. It is clear that this bill will be applied unevenly, in order to muzzle Palestinian freedom of expression.

The real-world implications of such policies and the collaboration between social media platforms and the Israeli government are brought into sharp focus during times of unrest, such as those following Muna el-Kurd’s viral social media post about the ethnic cleansing of East Jerusalem.


As Israel carried out violent attacks on Palestinian worshippers in Jerusalem and during a siege on Gaza, violence targeting Palestinians also erupted in Israel’s mixed cities. The events sparked an outpouring of social media posts, as the world watched these events unfold in real-time. During this period, a clear bias on social media platforms emerged between content moderation policies for Hebrew- and Arabic-language posts. 7amleh documented 183,000 instances of hate speech against Palestinians, mostly in Hebrew. While anti-Palestinian hate speech was allowed to remain on social media platforms, Palestinian users reported that Instagram and Facebook removed hundreds of pieces of Arabic content in just three weeks, with tens of thousands estimated to be removed annually. When these content removals were appealed to the social media platforms, many were restored because they had not actually breached the platforms’ content policies. In fact, much of the restricted content was documenting human rights abuses.

For example, when Facebook was found to be removing posts referring to the Israeli army storming Al-Aqsa Mosque and attacking worshippers, the company claimed that a human moderator had mistaken the “Al-Aqsa Mosque” for the armed Palestinian group, “Al-Aqsa Martyrs Brigade,” showing a lack of cultural understanding of the Middle East and North Africa (MENA) region, and inadequate checks on the moderation process.

These types of content restrictions don’t just occur during times of increased unrest that draw global interest. Many users, including Palestinian supermodel Bella Hadid, have claimed that their accounts have been restricted, and content has been removed after posting about Palestine on Meta-owned Instagram and Facebook. Other cases on Meta’s platforms include Facebook’s suspension of the page for Al Qastal, a Palestinian news outlet, and the removal of pages run by Palestinian journalists.

Often, Meta blames these issues on “technical glitches”. However, this does not explain the extent, high frequency, and variety of censorship experienced by social media users.

The problem of biased content removal policies is so widespread that Meta’s Oversight Board has recommended an independent review into how the company moderates Arabic- and Hebrew-language content, with the report due to be published later in 2022.

The result of biased content policies and collaboration between technology companies and governments is the creation of an inequitable digital space. By being prevented from organizing, seeking solidarity, or even simply sharing the realities of their lives, marginalized communities are censored and further oppressed. Instead of allowing all users an equal opportunity for self-expression, social media platforms have contributed to the chilling effect of restrictions on freedom of speech, which impacts the global narrative surrounding certain causes. As was clear in the context of Russia and Ukraine, Meta made the decision to relax its hate speech policies in order to allow Ukrainian users impacted by the conflict the freedom to express themselves. Evidently the company has the will to stand with oppressed people in certain contexts, and understands the need for those groups to gain solidarity via social media platforms. However, such decisions are not extended equally to all users worldwide impacted by war and oppression, as is the case in the context of Israel and Palestine. Palestinians are not only prevented from speaking out against their oppressors, but also from raising awareness of human rights abuses. Once again, Palestinians are denied permission to narrate.

Such policies are part of a deliberate strategy that reflects the western colonial hierarchy, where groups such as white Europeans are permitted to speak out against their oppressors. However, when groups impacted by European colonialism speak out, such as Palestinians, it is considered incitement. Social media companies must ensure that their policies are applied equally across digital platforms, and that oppressed groups are granted freedom of expression online, especially when they are not permitted that right where they live. Social media companies must work harder to protect Palestinians’ freedom of expression. This means developing their content moderation policies in collaboration with Palestinian civil society and consulting with them directly to ensure that their rights are protected.