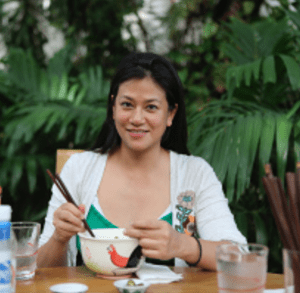 Chawadee is a Thai-American food writer whose first cookbook, Real Thai Cooking, will come out in Spring 2023. After leaving her job as a financial journalist for Reuters, she has written for many publications, including The Wall Street Journal, The Guardian, and The Financial Times. Chawadee currently resides in Bangkok with her husband and two children.

Contrary to received wisdom, Thai people love cheese enough to slather it all over their noodles and barbecue — but only if it’s a certain kind of cheese. Thai artisanal cheesemakers are attempting to change that by crafting their own takes on the classical varieties, featuring flavors that reflect unique Thai tastes. But what, exactly, would that look like?

It’s not often that one can witness the birth of a cheese, but here we are, amongst the wine glasses and shining cutlery of Terra Restaurant in the Northern Thai city of Chiang Mai, doing just that. Over bottles of Cabernet Sauvignon and the last remnants of a charcuterie board, restaurateur Aarya Surindhara and cheesemaker Damien Falco are discussing the qualities of a cheese that would best represent Terra, Aarya’s restaurant, and in the process, crafting a unique cheese that will articulate the verdant, hilly terroir of Northern Thailand itself.

Aarya, also the proprietor of Mollisol Farm, a mountaintop working farm-slash-retreat, wants a hard, crumbly cheese with oomph like a Parmesan, which can keep well and is easily portable. “Hard cheese is more mountain-like. It’s a good thing to have cheese that stays with you.”

Damien is worried about the effect that making this type of cheese will have on his own operations at Homemade Cheeses-Maker Thaïlande. At the company at which Damien is the one and only employee, he has a hard and fast rule against making Parmesan (which takes at least 18 months to age) and Pecorino (six months at least):

“The more it matures, the less money I make. Maybe I will have no customers left.”

After much back-and-forthing involving debates over how to add an extra room for Damien because blue cheeses cannot be stored with other cheeses in the same room — the blue mold that veins the cheese, after all, is contagious — Aarya and Damien agree on the crafting of two cheeses initially: one, a creamy, bold blue inspired by Italian Gorgonzola; the other, a soft, spreadable cheese flavored with the herbs grown on Mollisol Farm. Late in the evening, they finally part, promising to meet again later in the year to talk over the making of four more cheeses for Aarya, one incorporating the flavor of makhwaen, a Northern Thai spice similar to Sichuan peppercorns. In effect, they have birthed a veritable litter of cheeses.

Aarya, who believes passionately in the ability of the Northern Thai soil to grow anything, sees her patronage of local cheesemakers as a natural extension of her championing of the local farmers whose ingredients fill her menus.

“We are by far the biggest supporters of local cheesemakers in the North,” said Aarya, whose store adjacent to the restaurant, “Farmers & Co”, features the cheeses of three or four local cheesemakers at any one time. “I seek out those in need of support. I seek out those who are struggling, who are in need of help. It would be a shame to lose this skill. We are so lucky to have this around.”

At first glance, Aarya might have her work cut out for her. To many outside of Thailand, cheese seems like a hard sell in a country that, as many are quick to point out, boasts an 84 percent lactose intolerance rate. But this means little to the actual modern-day Thai, who now considers pizza, pasta and cheeseburgers as regular lunchtime alternatives to noodles or rice.

“It’s everyday life now,” shrugs Petch Boonchoochuay, one of those Thais and a cheesemaker himself under the aptly-named label “The Cheesemaker”. “Most places will have some dairy product.”

Visanu Tantatsvadi, owner of the long-running Bangkok institution Pan Pan, agrees. Open since the 1980s, Pan Pan is credited with bringing “Italian food” to the Bangkok masses, in effect “translating” it for diners who flock to their nutmeg-spiced bolognese, super-creamy carbonara, and spicy cozze alla marinara. “Thai people can eat cheese. They just can’t eat food that doesn’t fit into their particular taste. They like garlic, onions and chilies.”


In actuality, cheese is becoming big business in Thailand. Although worth a mere US$50 million in 2019, cheese sales are expected to generate nearly US$105 million in 2022, with revenues likely to grow 5.5 percent a year for the next five years, according to Statista. It would make sense, then, for cheesemakers to create a cheese targeted specifically for Thai tastes. But in a fledgling market, it’s becoming hard to pin down exactly what a Thai-tasting cheese would look like. “There are no Thai tastes just yet,” said cheesemaker Jarutat Snidwongse na Ayutaya, the founder of Jartisann, arguably Thailand’s most high-profile local brand.

But is that actually true? While the majority of cheese desired by Thais is of the spreadable variety on bread, a growing number of Thais are branching out, incorporating cheese into their own dishes. Alongside the pizzas topped with tom yum goong (spicy lemongrass with shrimp) and spicy krapao (holy basil stir-fry) available in Bangkok are plates of pad Thai wrapped in mozzarella instead of egg, Thai barbecue featuring cheese alongside the pork to be grilled at the table, instant noodles crowned with melted cheese, and Chinese-style hotpot with cheese as the broth — a Thai take on fondue.

The growing ease with which cheese is being incorporated into Thai food mirrors cheese’s growth in popularity across Asia. Japanese restaurants sell their own version of the cheese hot pot, cheese nabe featuring melted cream cheese, following in the footsteps of cream cheese-based dishes like seafood doria. In Korea, the rice cake snack known as tteokbokki is now often served with melted cheese on top, giving it the look of a gnocchi alla sorrentina. For the most part, these fusions utilize mild, malleable cheeses like mozzarella, playing on the texture of melted cheese and less on cheese’s different flavors.

“Mainstream mozzarella doesn’t have potent flavors and is often creamy or melted with famous international favorites like pizza or cheese toasties, so Asians are more familiar with this cheese,” said Samantha Proyrunthong, who owns Vivin Grocery-Bistro Ekamai, which monthly holds a popular all-you-can-eat buffet of all-local cheese. “The idea was that good and yummy cheese had to melt once heated and be rubbery or stringy in texture.”

While there are Asian food purists who are likely to bemoan this erasure of culinary borders, they are probably fighting a losing battle.

“It is similar to how Thai people learnt to eat hamburgers, drink wine, and eat sushi the way they were made in their original countries,” said Jartisann’s Jarutat. “It is simply globalization of the palate.”

As a result, a growing stable of good Thai cheesemakers would appear inevitable. The problem is that, well, it’s expensive — so expensive to make, in fact, that buying imported cheese is cheaper.

“Cheese starts to be cheap with volume,” explained Laurent Pousse, the Bangkok-based representative of Centre National Interprofessionnel de L’Economie Laitiere, a French government organization. “It is very expensive to make cheese. The craft is expensive. The know-how is expensive.”

And that’s just one in a litany of obstacles for the aspiring Thai cheesemaker. “There are two problems: consistency and shelf life. It’s too hot,” Laurent said, adding that the ideal temperature for a cheese cave should be 12-16 degrees Celsius. “Otherwise your fermentation is too fast and you cannot keep up.”

Then, there is the problem with the milk itself. “The cows don’t eat enough flowers and they aren’t fat enough, but the curd can work,” said Homemade Cheese’s Damien, who hails from a family of cheesemakers. “In France, it’s very easy. The cheese is fantastic because the milk is fantastic. Here, the cheesemaker has to do more work.”

Thailand’s sub-par milk situation is an opinion shared by Damien’s French compatriot. “You can do whatever you want, but if it’s not a milk country, you won’t get good milk,” said Laurent. Cows, even if imported directly from France, won’t produce the same cheese. “If you don’t get the terroir, you get something else.”

But maybe that “something else” is exactly what people want. Rob Denis, the Canadian-based owner of Chiang Rai Cheese, began making cheese with the express purpose of highlighting the different conditions of Northern Thailand. Today, Rob oversees the production by phone, leaving the day-to-day operations to young Thai cheesemaker Bam and her bulldog. “Chiang Rai has a unique climate in Thailand which allows corn to be grown locally,” he said. “Because of this the cows can be corn fed which we believe gives their milk a special and unique taste which extrapolates into excellent world class flavors for cheese development.”

This quality may be best embodied in Chiang Rai Cheese’s “mountain cheese”, a blue-veined hard cheese that is reminiscent of French Comte but has an almost spicy aftertaste. “The natural cultures present in the milk due to feed, climate and other factors bring out a very special cheese flavor that can only come from the Chiang Rai area of Thailand.”

In order to prosper, Thailand’s neophyte cheesemakers might do well to study the steps taken by another relatively young industry: Thai wine. Nestled in the wooded hills of Khao Yai lies the country’s best-known local winemaker, Granmonte Wines, run by sisters Nikki and Mimi Lohitnavy. After 25 years, Granmonte now produces up to 200,000 bottles a year on more than 200 rai (320,000 sq. m) of land, growing mostly Syrah and Chenin Blanc grapes which do well in hot weather.

Thai wine, like Thai cheese, still struggles with a “junk food”-like image to some, due to a preponderance in 1980s’ markets of fruit-based local wines, which spoiled quickly in the bottle. The reason for wines made from fruits like mangosteen and pineapple, explains chief winemaker Nikki, is that fruit-based wines faced four times less tax than wines made entirely from grapes. Wine is “not in Thai culture. That’s why it’s a bit of a challenge. Thai wine existed, but it wasn’t very good back then.”

Like Thai cheesemakers, local winemakers are also saddled with expensive barriers to entry. There is the cost of the equipment, imported wood for barrels (“Local wood is too porous,” explains Nikki) and land. Meanwhile, at the store, Thai wines cost just as much as their imported counterparts, which are taxed so heavily that some end up double the prices that one would pay in their native countries. As a result, there are still only a handful of local wine producers, Nikki said:

“It’s very difficult to progress, to get it right, grapes are not native so you have to know how to manage them. It costs quite a lot to produce grapes.”

All the same, wine — particularly red wines made with punchier, heavier grapes — has become something of a status symbol in Thailand, akin to driving a nice car or carrying a good bag. In 2020, Thailand became the heaviest consumer of wine in Southeast Asia, with more than 103 million liters of the “drink of the gods” consumed a year.

To cheesemakers, wine’s progress will inevitably blaze the trail for its natural companion, cheese. “In my opinion, cheese will eventually roll down from the top of the hill, and the mass will really learn to enjoy it in 10-20 years’ time,” said Jartisann’s Jarutat. “Think about how sushi or wine were first introduced to Thailand many decades ago; they were sold only in top venues. Now, sushi is sold on the streets and wine is drunken by the middle class.”